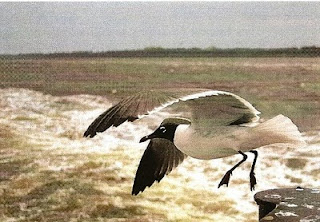 I grew up in northern New England, on the short but beautiful coastline of New Hampshire. We lived about two miles inland, but regularly we made trips to the beach to go swimming, to picnic,and later, when we were in high school, to work at the restaurants and tourist traps that lined the boardwalk. There are two things that always bring back memories of my childhood by the Atlantic: the smell of salt air, and the cry of seagulls. I know, lots of folks think they are a nuisance. They are, after all, scavengers, garbage collectors if you will. I've never seen a thrown out bit of food gulls wouldn't eat. It's part of why they are such a common sight at landfills as well! But still, they can be beautiful as they glide across the sky or bob up and down on a wave. I for one, would be most saddened indeed if there were no more gulls!
There are many types of seagulls, and the ones that I grew up with are different than the ones that frequent Sanibel. But still, they have much in common, including their rowdy cry! One of the gulls that is native to the Gulf Coast is the Laughing Gull--so called because it's cry sounds like your Uncle Marvin laughing at the movies!
In the wake of the Deepwater Horizon disaster we read a lot about pelicans--Brown Pelicans in particular. Indeed, one of my first posts was about the fate of a few dozen pelicans who had been relocated to Sanibel. And the truth is that as of October 20 at least 766 Brown Pelicans have been impacted by the spill. But as tragic as that is, it pales in comparison to the Laughing Gulls. The U.S. Fish & Wildlife Service reports that 2815 of the little scavengers have been impacted--and about 2/3 of that number were found dead. Despite their name, it's clearly no laughing matter!
The International Union for the Conservation of Nature (IUCN) ranks species according to how threatened they are. The scale ranges from "Least Concern" to "Vulnerable" to "Extinct" with a few stages in between. Laughing Gulls are ranked as being of "Least Concern". And relatively speaking, I guess that's true. A couple thousand Laughing Gulls isn't going to make or break their survival. But I keep thinking about creatures like the bison, who probably would have been ranked as being of "Least Concern" in days long gone by. I just don't like the nomenclature., for ultimately, we should be concerned about all of God's creatures--commonplace like Laughing Gulls, or beautiful and majestic, like Brown Pelicans. They all count. They all matter. "Not one of them is forgotten in God's sight." (Luke 12:6) Sure, Jesus was talking about sparrows at the time, but I suspect his words cover Laughing Gulls as well.

(To hear a recording of the cry of a Laughing Gull visit the All About Birds website created by the Cornell Laboratory of Ornithology: www.allaboutbirds.org/guide/laughing_Gull/sounds) 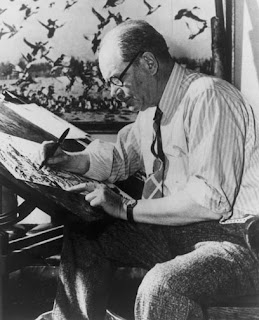 Crossing the Causeway onto Sanibel recently you couldn't help but see the roadside sign that said "Ding" Darling Days, October 17-23. If you don't know the island, you may not realize that "Ding" Darling is the name of the National Wildlife Refuge that occupies a significant portion of Sanibel. But even if you do know that, you may not know who "Ding" Darling was.
Born in Iowa in 1867, John Norwood Darling grew up to be a prominent editorial cartoonist. He signed his cartoons "Ding"--a contraction of his last name. He was published in over 150 newspapers, and in time won two Pulitzers for his work.
Over the years Darling developed a strong interest in conservation, which led to his appointment in the thirties to the Bureau of Biological Survey (know today as the Fish and Wildlife Service. Later he was instrumental in a number of other environmentally related efforts, including the Federal Duck Stamp program. He wrote prolifically, and was often involved in conservation education. He was direct and to the point. In one essay, written in 1935, he said: "We have invaded all the national ranges, the homes of our wild life species. We have evicted them and spread ourselves out with all our paraphernalia . . . . In fact, we have thrown nature's cradle out the window and made our home where nature used to cradle its wild life species." ("Conserving Our Wildlife," Recreation, 1935)
Darling's vacationed on Captiva, Sanibel's neighboring island to the north. When an attempt was made in the forties to sell off land on Sanibel owned by Florida, Darling was a key player in seeing that it was kept for conservation purposes. The refuge that now bears his name, started with that land and other parcels added over the years. Until his death in 1962, Darling was vitally interested and involved in the effort to carve out part of Sanibel for wildlife. The refuge was officially named for him in 1967. An appropriate tribute for the man who talked about nature's cradle!
"Ding Darling Days is a week long celebration of National Wildlife Week. There are activities and educational opportunities for the whole family. For more information check out http://www.dingdarlingdays.com/. And to learn more about the refuge's namesake, visit the website of the "Ding" Darling Foundation at http://www.dingdarling.org/.
(Photo Credit: FWS, NCTC/The Des Moines Register)

A friend sent me a note today wishing me a "Happy Thanksgiving!" While at first glance one might wonder if my friend is a little confused, the truth is today is Thanksgiving in Canada. Established by the Canadian Parliament in 1957, the holiday is celebrated on the second Monday of October. It is a harvest festival, designed to offer God thanks for the bounty of autumn's crops.

Though a recent incarnation in its present form, Canadians have been observing Thanksgiving in one way or another for centuries. One earlier celebration goes back to 1578, when Martin Frobisher marked a safe Atlantic crossing which ended in modern-day Newfoundland. And Canada's native population, the First Nation peoples, have held harvest celebrations and days of thanksgiving long before any Europeans set foot on Canadian soil.

My Masters thesis was a theological history of the Shaker Community at Sabbathday Lake in Maine. Well-known for their gorgeous furniture and their plaintive chants and songs, the Shakers were a profoundly grateful people. I had access to the daily logs that had been kept for almost two centuries by various clerks of the community, and shall never forget an entry made by Otis Sawyer on Thanksgiving Day (US) in 1880: "The good Shakers," he wrote, "need no president nor Governor to remind them of the duty of Thanksgiving, for not only one but everyday of the year their first breath in the morning is prayer and thanksfulness for many blessings everyday enjoyed."

He is so right! I think about my own life here on Sanibel. We're blessed with the beauty of the Gulf. We're blessed with spectacular night-time views of the stars and the moon. We're blessed by intriguing flora and fauna. There is so much for which to give thanks! So why wait until the second Monday in October, or the fourth Thursday in November? Why wait for Parliament or the President to declare a day of thanksgiving? Why not make it a daily celebration?
Posted by John H. Danner at 1:46 PM No comments:

I lived in metropolitan New York for eighteen years, and crossed the George Washington Bridge more times than I can begin to count. Often when I traveled into the city it was to visit one parishioner or another at one of New York's many fine hospitals. For them the George (as it's often called by locals) was a bridge to health and hope. Other times I was going into the city to see a play or concert, and the George became a bridge to culture and fine art. But this past week the George became a bridge to death for a young man named Tyler Clementi.

I'm sure you've read about it, or heard about it on television. Clementi was a promising young violinist and a freshman at Rutgers. He was by most accounts rather shy and retiring. And he was gay. His roommate and another student thought it would be fun to film Clementi in a romantic encounter and then broadcast it on the Internet. This invasion of privacy, this act of cyberbullying, was more than Clementi could bear. And so, after leaving a message that reportedly said simply "jumping off the gw bridge sorry" he traveled to the city, leapt off the George, and met his death in the cold waters of the Hudson River.

Studies indicate that gay and lesbian young men and women are four times more likely to commit suicide than those who are not. Often because of the torment of bullies. Regardless of where you stand on various gay rights issues, the right to live a life free of harassment seems to be one of those basic rights all people should be able to expect. But on many fronts we are a long way from realizing that goal. Bullying and harassment are part of the lives of too many people, young and old. Race, gender, ethnicity, religion, age, sexual orientation, physical and mental ability--there are so many differences in our society. The day must come when we can rise above our differences and live in peace. But for that to happen we'll need to build bridges of understanding. We'll need to take time to learn about our neighbors so that we can better appreciate who they are.

I don't cross the George much these days--it's a bit out of my way here in Florida. But I do cross the causeway from the mainland to Sanibel several times a week. It's a beautiful ride--almost four miles of Gulf Coast beauty. I think the next time I cross it, I'll use it as a time to pray. Don't worry--I'll keep my eyes open. But still I'll pray. I'll pray for Tyler's family, and for all people who are so harassed that they consider taking such a leap. I'll pray for the day bullying comes to an end. And I'll pray for the courage to speak up whenever I am privy to such behaviour. I may not build a whole bridge in doing so, but at least I'll add another plank in the ongoing effort.
Posted by John H. Danner at 9:40 AM 1 comment: