A Bit of Green, A Bit of Wisdom 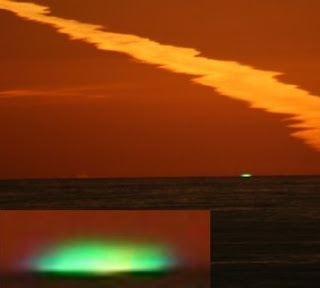 Wisdom is not restricted to those more advanced in years, yet I find that often older women and men do have a certain level of understanding that is sometimes missing in the young.  So it is that one of the great joys of pastoring a congregation with so many folks in their eighties and nineties means being gifted with their astute observations.

This past week, for instance, I had a conversation with a parishioner who was celebrating her eighty-ninth birthday.  It was a gorgeous day and as she talked about her love of Sanibel and Captiva she mentioned sunsets in particular.  "I even saw the green flash once off of Captiva."  (For those who are unfamiliar with the term "green flash" it refers to a sudden appearance of the color green in the sky at sunrise or sunset which usually lasts only one or two seconds.)

"Lots of people never see it," she went on.  "They're too busy telling their children to pick up their towels and things like that."

"My son is an artist, " she went on, "and he's always telling his students all they have to do is look if they really want to see beauty."

It made my day.  All you have to do is look if you really want to see!  How wise!  How profoundly true!

Might there be a green flash in your future! 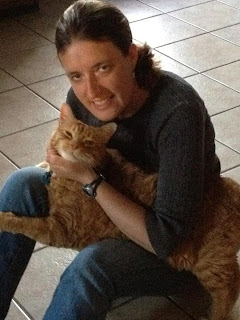 My daughter Elizabeth lives in Somerville, Massachussetts, just outside of Boston.  She's a children's librarian in Cambridge and a deacon at her church.  She travels to Mexico once a year to volunteer at an orphanage and she and her partner Erica are in the process of becoming adoptive parents.  She loves her cat Rocky, enjoys the Beatles (and a host of musical groups I've never heard of), she's fond of odd sorts of craft beers (like Blueberry Ale) and is a tofu aficionado (she's a vegetarian!)  Liz is just a little bit of a thing.  She barely measures 4'10" tall, and weighs in at a real feather weight.

This week on Thanksgiving she's going to be running in a 4 mile race called the Gobble, Gobble Gobble.  Thanksgiving Day races always have cutesy names, the Turkey Trot being one of the more common of them.  Normally she runs 5K races.  "But," she told me on the phone,  "I can always walk the last part of it if I run out of steam."

Since she and I talked about her race this past weekend, I've been reflecting on the fact that her participation is something of a miracle in and of itself.  You see when Liz was born she had serious gross motor control issues and hyper-extended knees.  She was in a brace that bundled up half her body for the first six months of her life.  She didn't even sit up on her own for many, many months.  She then underwent all sorts of physical therapy and adaptive physical education through most of her growing years.  And now she's running in the Gobble, Gobble, Gobble.

I have much for which to be thankful this year.  My wonderful wife Linda, my three kids, my in-law children, my grandkids, my Mom, my friends, my work, my church, my co-workers, my freedoms as an American, food, shelter, music, books . . .  the list is almost endless.  But I am also grateful for things in my past, and at this moment, most especially, the doctors and nurses and therapists and teachers and others who helped my daughter grow into a young woman who can run a race on Thanksgiving--even if she ends up walking the last mile.

Thanksgiving blessings one and all!
Posted by John H. Danner at 2:41 PM No comments:

OK--the bad news is that Florida really botched up the election process this year.  Folks had to wait in line sometimes as long as six or seven hours to cast their ballots.  At almost every turn officials messed things up.  The number of early voting days were cut short.  Polling places were eliminated.  There weren't enough machines for tabulating the votes on hand at the polls.  It was a mess.

But here's the good news--people really did wait in line for six or seven hours to vote!  People cared enough to stick with it, even when it was uncomfortable.  Here on Sanibel a whole slew of voters got caught in a downpour as they waited outside.  Lunch time came and went for many.  Stomachs growled, but for the most part, people didn't.  They read books, they chatted with their neighbors.  A local pizza place brought some pies to those who were in line.

There is no question, Florida needs to get this straightened out.  Being the laughingstock of the nation is not very pleasant!  Our elected and appointed officials need to figure out what went wrong and then they need to correct it.  No ifs, ands or buts about it!

But in the meantime we can celebrate the sense of civic responsibility evidenced by so many Floridians!  I'm not proud to be from Florida right at the moment--but I am proud of my fellow Floridians who decided that voting was and is worth the hassle.
Posted by John H. Danner at 4:23 PM No comments:

Today, in a chilly graveyard in upstate New York we buried my thirty-eight year old niece Tonya.   She outlived the doctor's expectations by over two decades.  And despite being profoundly developmentally disabled, she lived a life with real meaning and purpose.  She couldn't walk, she was non-verbal, she had a host of medical issues.  But she was a special young woman, dearly loved by many.

At her service we read from Paul's First Letter to the Corinthians.  "Love," he famously writes, "is patient; love is kind; love is not envious or boastful or arrogant or rude....It bears all things, believes all things, hopes all things, endures all things.  Love never ends."  (13:4-5a, 7-8a)

Tonya's presence in the lives of those of us who knew her meant we all needed to learn how best to love, how best to care for her needs, which were many, while still preserving her dignity.  We had to learn about patience and kindness and above all endurance.  In caring for her we also learned how to better care for one another.  We learned how best to love.

The world may not remember Tonya--but we who knew her will.  Might we also remember the lessons about love she taught us along the way.