A Very Personal Reflection on Rotary

This week I will be conducting my final meeting as President of the Rotary Club of Sanibel-Captiva.  I have been a part of the club since 2011, and have held several offices along the way, including a four-year-stint as Treasurer.  (Those of you who know me well can stop snickering anytime now!  I can do basic math!)

At any rate, it has been a great ride!  I have thoroughly enjoyed having this chance to lead such a great group of men and women who are truly committed to making this world a better place.  One of the slogans of Rotary is "Service Above Self"--and I have seen that enacted many times by my fellow Rotarians.

I joined Rotary--and will continue to be an active member--because as a Pastor it is very easy to be somewhat isolated from "the real world."  Not that a lot of real world issues don't surface in the church--they do.  I had four deaths among my congregants in the space of just ten days over the last week or so.  And we are constantly talking about, and acting on real world issues:  abortion, immigration, addiction, race relations, interfaith relations, and the list goes on.  Still, while we don't all agree about every aspect of theology (we are a United Church of Christ congregation, after all) we do all come from a faith-based starting point.  God is present.  God is love.  We are called to reflect that love.

Such is not the case for much of the world--and in this country, an increasing portion of the world.  But even though the theological basis may be missing, Rotary reminds me again and again, that people can work together despite that reality.

A fellow Rotarian, who served this year as President of her club, wrote me a note today that ended:  "I hope you had a good year as President, I know I'm looking forward to getting my life back."  I understand!  But I also know I will miss ringing the bell that starts our Friday morning meetings.  Like I said, it has been a good ride.  I am grateful to those who entrusted me with the office.  And wish my successor all the best! 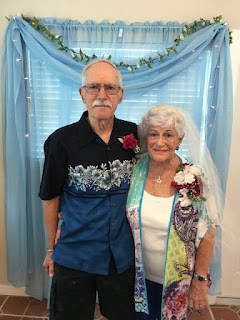 We have a policy here at the church that says wedding ceremonies will not be conducted for a couple until they have gone through three hours of premarital counseling.  It's a good policy--and on least one occasion prevented train wreck of a marriage!  But the same policy does not hold for folks who want to renew their wedding vows.  Usually it happens after twenty-five or fifty years, but earlier this winter I got a phone call from a woman named Jan who asked if I could officiate at such a ceremony for her sixtieth wedding anniversary.  I quickly agreed.  Sixty years is pretty impressive!  If we'd done any pre-ceremony counseling I suspect she and her husband could teach me a thing or two!

All that said, I never met them until about twenty minutes before the ceremony.  It was to take place in their rented vacation home here on Sanibel, with their children, grandchildren and a few friends in attendance.  I was greeted at the door by Jan's husband Lee.  As well as the family dog, who made his way in and out of the room throughout the ceremony.

Lee had prepared something for me to read at the ceremony, that was a bit of a history of their relationship.  They met in high school in Kansas City, MO.  In their senior year their lockers were just down the hall from each other.  Lee wrote that he "fell in love with Jan the first time he saw her."

They sang together in the school choir--and Lee made sure to sit right behind Jan.  When the class picnic was scheduled, they made a deal--if Lee would drive, Jan would make some lunch for them to share.  It was their first date.

They got married in 1959, and honeymooned in a borrowed cabin in the Ozarks.  They had two children, a boy and a girl--Joe and Lynn.  And they are enormously proud of both of them, as well as their adult grandchildren.

Earlier in the year, Jan told Lee that wedding vows expired after sixty years, and that they would need to re-up.  He happily agreed!

The vows they actually used were written for the occasion.  Lee vowed to "continue to love you, honor you, and care for you forever."  And Jan declared that their years "together have been a blessing to me."

I suppose none of this is especially extraordinary--yet in this day and age in one in two marriages falter, I for one think we should hold such folks in great esteem.  They are, in so many ways, domestic heroes!

I am pleased to have met Lee and Jan--and to have helped them celebrate their many years of marriage.  (The veil, by the way, that Jan is wearing in the photo, came from the original wedding ceremony!)

Blessings on them both! 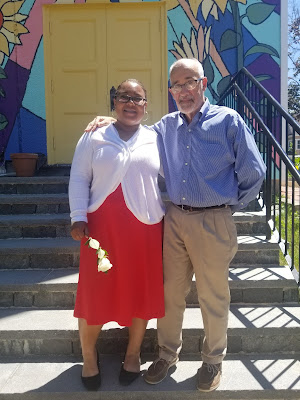 This past Sunday my oldest granddaughter was confirmed.  Along with five other young women, all around fourteen or fifteen, she took vows affirming her desire to follow the way of Jesus as an active member of her church.

Each one of the confirmands offered very thoughtful statements of faith.  I was especially impressed by their honesty.  No one seemed to pretend that they had all the answers.  One of the young women even began her statement by saying "Christianity is confusing."  And so at times it is!  Theological explanations are often rather circuitous.  And stated beliefs are not always realized in actual practice.  Confusing indeed!

My granddaughter shared some of her classmates hesitancy.  "I am going to be honest," she said, "at first I wasn't sure if I wanted to be confirmed, I went back and forth on it multiple times.  I didn't really know why, but I figured out it's because I don't necessarily believe all of the religious stuff."

We didn't have  a chance to unpack what she meant by "religious stuff"--I suspect it has to do with Virgin Births and walking on water.  But despite her questions, her doubts, I think she's got what it takes to be part of the church.  "I believe in the human race," she said.  "I believe in what we can do as a whole . . . if we all come together to work."  And that, she says later, in her statement, can happen in and through church.  Working together.  Being community.  "[A] welcoming community," she says, where "everyone takes care of each other."

There's not a lot of God talk in her statement--but from where this proud grandfather/preacher sits, there is all sorts of religious stuff.  And, heavens, this child's statement even includes a word about climate change!  It's a problem, she says, "and [it's] not going away unless we take action fast."

Today I feel better about the possibility of that happening because my granddaughter, and others like her, just got confirmed.
Posted by John H. Danner at 3:58 PM 2 comments:

Distracted from the Truth 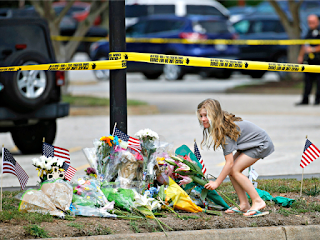 I was glad to hear our local sheriff say last week that the people carrying guns in school should be people with badges--not teachers.  Some counties in Florida have been encouraging training and arming teachers, but it just makes no sense to me.  There that could too easily go sideways.  And besides, teachers today have enough on their plates, enough worries, concerns and responsibilities without adding all those that would come with being charged with responding to gun violence with a weapon.

I thought about this after hearing about the latest mass shooting in Virginia Beach.  Not that it had anything to do with schools. In fact, it feels even more random in some ways than some of the other mass shootings.  Perhaps a motive will be discovered.  Perhaps mental illness will be revealed in the investigations, but for the moment it seems like some guy simply decided to shoot up his co-workers for no particular reason with no particular warning.  But what seems to have happened is the conversation has quickly gotten sidetracked to a discussion about silencers and ammunition magazines.  Just like the school shootings quickly get moved to discussing things like arming teachers and "hardening" schools.

As long as we avoid the larger issues, as long as we get sidetracked by a piecemeal approach, we will more than likely continue to experience these horrific events which, as I said to my congregation yesterday, have gotten so commonplace that we are not even shocked by them anymore.  And that, in some ways, is almost as tragic as the incidents themselves.