Being citizens of a democracy we like to vote on all sorts of matters. We vote for candidates for political office. We vote for singers and dancers on reality shows. We vote for our favorite movies and television shows and bedtime snacks. And some of us, in faith communities with congregational polity, even vote for our spiritual leaders. So I suppose I shouldn't have been surprised when I read in yesterday's New York Times (10-26-11) that there is now a movement afoot to vote on amendments to various state constitutions that would establish the legal definition of the beginning of human life.

Called the personhood movement, it appears to be most advanced in Mississippi, where anti-abortion forces have banded together to place a proposition on the ballot that amends the constitution of that state to read "the term 'person' or 'persons' shall include every human being from the moment of fertilization, cloning or the functional equivalent." This amendment, presented as Proposition 26, would thereby criminalize all abortions. Even those involving rape or incest. Even those involving ectopic pregnancies. One of the ironies of the amendment, according to scientist Randall Hines, who is cited in the Times article, is the simple fact that, in his words, "the majority of fertilized eggs don't become people" because they never implant in the uterus! (New York Times, 10-26-11, A-16)

I was alarmed, though not really surprised, to read in the same article that there is an attempt here in Florida to introduce similar legislation. I will need to follow up on it.

The whole personhood movement strikes me, however, as rather illogical. After all, those who are promoting such measures as Proposition 26 are opposed to women exercising any choice when it comes to abortion. And most who are opposed to abortion would argue that we have no right to choose, because to do so interferes with divine prerogative. Yet in the very method they are using, voting, they are relying on voters making choices about when life begins. They are suggesting it is a matter not of divine prerogative, but rather majority rule.

If anti-abortion folks believe God has said abortion is wrong, then for them it is wrong. It doesn't matter what voters might say. But protecting their right to believe that way and to act on such beliefs requires protecting the rights of others to believe and act else wise.

Calculating Costs in a Time of War

This month marks the tenth anniversary of the war in Afghanistan. Three of my four grandchildren have been born during that time span--and even my oldest, who is almost eleven, can't remember a time when we weren't fighting in that far off land.

Many people have claimed that our current fiscal mess, is at least in part, attributable to the costs of the wars in Afghanistan and Iraq. It makes sense to me, but I thought I'd do a little poking around to see what I could find out in terms of raw statistics.

It seems that the cost to date of the war in Afghanistan runs to something over $465 billion dollars (www.costofwar.com) In an article published last fall, it was noted that the cost per year per soldier is estimated (depending on source) to be anything ranging from $425,000 to $1,000,000. (Wall Street Journal, 9-8-10) That, of course, includes far, far more than a soldier's salary--still it's interesting to note that the median salary of a teacher, according to the Bureau of Labor Statistics, ranged from $47,100 to $51, 180 in May of 2008, and for fire fighters in the same year, the median salary stood at $44,260. How many teachers and firefighters might still have their jobs if we had not been at war? The costs of war are not just financial!

Of course the ultimate cost of the war in Afghanistan, is measured not in dollars, but rather in lives. As of October 10, 1,788 U.S. service members have been killed in the war. (New York Times, 10-11-11) In addition, close to 1,000 Coalition troops from over two dozen countries have also died. (www.cnn.com) And then there are the much harder to count Afghan deaths, both civilian and military.

Has it been worth it? The experts claim it is far from over, by the way. Many, many more dollars will be spent. There will be more deaths. We rightly honor those who serve, and especially those who have given even their lives to the cause. But does that mean we continue on? On this tenth anniversary, I leave that to you to judge for yourself. I just hope there does come a time when my grandchildren can experience our nation in a time of peace.
Posted by John H. Danner at 11:41 AM No comments:

Mormons, Catholics and Me

Over the weekend a candidate's introduction made at the Values Voter Summit by the Rev. Dr. Robert Jeffress, raised two questions that have dominated the news for the last couple of days: "Are Mormons Christians?" and "Is Mormonism a cult?" While these are controversial questions, I was even more taken by another question that surfaced in the Texas pastor's remarks. "Do we want a candidate," he asked his audience, "who is a good, moral person--or one who is a born again follower of the lord Jesus Christ?" Jeffress obviously assumes that a born again follower of Christ is a good moral person. And considering his audience, it was intended to be a rhetorical question. But here's the problem: such a question runs contrary to the spirit, though not the letter, of the law.

I looked it up to be sure I remembered it correctly. And I did. The last part of Article VI of the Constitution of the United States clearly reads "no religious Test shall ever be required as a qualification to any Office or public Trust under the United States." In other words, no law or regulation can require any office holder to be of a particular religious persuasion. I realize that doesn't rule out bringing personal preferences to bear on ones decisions as a voter. Still, in a pluralistic democracy such as ours, the wise voter recognizes that the best woman or man for the job may or may not be a coreligionist! Being a good Christian doesn't necessarily mean one would make a good president.

Maybe its time to revisit the speech John Kennedy made to a group of Protestant ministers in Houston who were challenging his candidacy based on the fact that he was a Roman Catholic. In that stirring defense of the separation of church and state, Kennedy spoke of the presidency as "a great office that must neither be humbled by making it the instrument of any one religious group nor tarnished by arbitrarily withholding its occupancy from the members of any one religious group . . . ." Protecting the right of Roman Catholics and Mormons and Jehovah's Witnesses to hold office protects the right of all to hold office. To do otherwise would be a great tragedy. Speaking of his fellow Roman Catholics, Kennedy went on to say "if this election is decided on the basis that 40 million Americans lost their chance of being president on the day they were baptized, then it is the whole nation that will be the loser . . . ." What was true in 1960 is still true today--for Catholics, Mormons and Protestants like me.

Of Dulcimers and Mothers 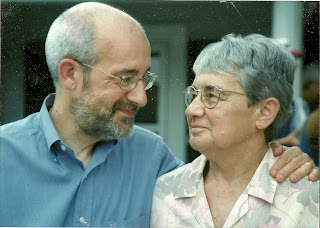 Its time for the Daniel Boone Festival in Knox County, Kentucky. That's where my mother lives--and its one of her favorite times of year. The week-long celebration features all manner of down home festivities and treats, including a good dose of folk music. Not the Peter, Paul and Mary kind of folk music (much as I love it!) but real, home-made, folk music.

My mother cared for my disabled father for seventeen years before he died back in 2009. Two years before then she decided, at the age of seventy-four, to try something new. She's always been touched by the plaintive sound of the dulcimer, a stringed instrument which figures prominently in Appalachian music. So she took a few lessons. Then she had a dulcimer made for her by a man named Lloyd Graham. It's a lovely piece of work--its cheery wood fairly sparkles! She calls it Anna.

In time mother joined a dulcimer group called, I'm not making this up, the Knox County Porch Pickers. They'll be playing at a quilt exhibit this week at the festival.

The day after my father's Memorial Service, mother assembled us all, my brothers and sister and our families, in her living room for a bit of a recital. She started by playing "My Shepherd Will Supply My Need," Isaac Watts paraphrase of the 23rd Psalm. "I always start with that when I practice," she said. It is, I am sure, her musical prayer. Then she played "Red River Valley" and "Spotted Pony" and "Carry Me Back to Old Virginny." Finally, she wound up playing a piece called "Southwind." It's called that," she said, "because of the way you play it, like this." And then she demonstrated a strumming of the strings that, indeed, sounded like the wind. She almost seemed in another world as she played it.

As her fingers ran across the strings, emitting their lovely tones, I couldn't help but think how those same fingers had tended my father's aches and pains and over the decades, had prepared his favorite meals. How those same fingers caressed his cheek, even when he could do nothing to respond. And how for over fifty-six years, those fingers had been entwined with his in alove that reflected the very love of God.

All that from a little concert on the dulcimer! Amazing! Amazing grace indeed.

Happy Daniel Boone Week, Mom! Might you strum for years to come!