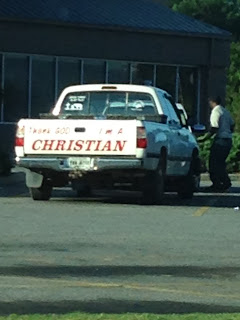 Middle America is different from the coasts--so is the Deep South.  Sometimes, as a life long Easterner, I forget that reality.  Folks in places like Tennessee and Kentucky are much more willing to wear their faith on their sleeves--or in some cases, as above, on their vehicles.  As I sat waiting for Linda in a parking lot in northern Georgia, I was amazed to see a white pick up truck a few rows away, with the words "Thank God I'm a Christian," emblazoned on the tailgate.

Later that same day, I was passed on the highway by a tractor trailer, decorated with a variety of Christian symbols and mottos, including "To God Be the Glory," again in red letters, this time on the side of a white cab, and, on the mud flaps, "Jesus Saves."  Somehow that seemed especially appropriate!

I am grateful to be a follower of Jesus, but I'm not sure I'd call it a point of pride.  Rather it means humbly recognizing that I can't do it on my own.  That I need guidance, that I need help.  Perhaps that is all the fellow with the pick up truck means as he proclaims he's a Christian.  But I'm not sure I would read it that way if I was not.  I might see it as a bit of braggadocio--as a boast.  I'm a Christian--I'm saved.

Maybe that's why I like those mud flaps.  If you'll pardon the pun, they seem much more down to earth.  Jesus' wise words save me from the messes I might otherwise get into.  Indeed, the way of Jesus even saves me from myself!  But that said, I'm not about to get my car painted with a cross--nor am I about to get a set of mud flaps.   I'll just keep traveling with Jesus in my own way.  And hopefully, though that won't show up on my vehicle, it will show up in how I live.   ﻿ 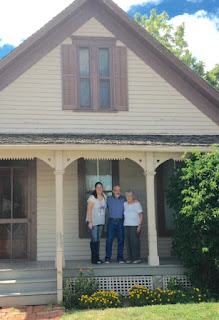 Regular readers of this blog will remember that last summer I took my mother to Wichita, Kansas, to visit Eighth Day Books, a bookstore she has done business with for years over the phone and through the mail.  It was a great trip, and the first item on her bucket list.

Earlier, my wife Linda had suggested she make such a list of trips she would like to take so that we could help make them happen.

Fortunately, she is a pretty frank person, or else explaining the term to an eighty-three year old might have been something of a challenge.

"Well," we explained, "it means a list of things you want to do before you, well, you know . . . before you kick the bucket."

My retired English professor mother loves a good simile or metaphor, and so caught on I
mmediately.


She gave it some thought and came up with at least two other ideas.  First, she wanted to go to Red Cloud, Nebraska.  Red Cloud, you ask.  It is the childhood home of novelist Willa Cather, and Mother has her PhD from the University of Nebraska--but she'd never made it to Red Cloud.


So the wheels were set in motion, and this past weekend, Linda, Mother and I all set out for Nebraska.  While there we spent time with my youngest brother Mark and his family, and on Saturday, Mother and I, accompanied by my niece Jennie, hit the road and drove across 150 miles of prairie to Red Cloud.


More about the day itself in another post--for now, I'll simply say it was a big success.


The next day Mother was a little teary.  "Well," she said, "I guess that was end of my bucket list."


"No," I quickly reminded her, "there was another trip on the list.  You wanted to go to Boston one more time."


Immediately she brightened up.  "Boston!" she said, "That's right!  You know it's like Jerusalem for me!"  And so it is.


So Lord willing, we'll make that trip to the city of baked beans, cod fish and the Red Sox in the coming year.


Bucket lists.  It's really never to early to make one--so what's on yours?  Dream big!  Dream wild!  But most importantly, dream now!


(Photo L to R:  Jennie, Mother and me on the porch of Willa Cather's childhood home in Red Cloud)
Posted by John H. Danner at 10:08 AM No comments: 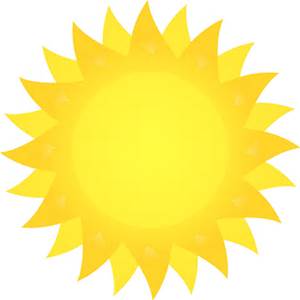 I will be on vacation at the time of the Florida primary for local and statewide offices, so I recently procured an absentee ballot.  I have a few choices to make in terms of the county school board and the supervisor of elections (a more hotly contested position here in Florida than in most places I suspect), as well as United States Senator.  There is also a proposed amendment to the Florida Constitution on the ballot.  It would mend Articles VII and XII of the Constitution and add language to provide tax exemptions around the installation of solar or renewable energy devices.

I'm a big fan of solar--especially here in the so-called Sunshine State.  It makes a lot of sense. And such an amendment would make it modestly more attractive from a financial perspective.  But still, I don't think folks are going to "go solar" for strictly financial reasons.  Indeed, some studies indicate a very long time is needed to recoup such investments.  No, I think the better argument is a moral argument.

Solar (and other forms of renewable energy) is a gift for our children.  It is a gift for our planet.  And when one gives a gift, while budget does factor in, other considerations are more important.  And in the end, many gifts don't seem to make a lot of sense economically, at least not in the short run.  You give a gift out of love, or respect, or just because you care.  So it may have to be with solar installations, and all other environmental measures.  We do them out of love for our children and respect for the Earth.  We do them because we care.

I will vote "Yes" on the proposed amendment.  But what else do I need to do?  What do I need to do about solar?
Posted by John H. Danner at 11:22 AM No comments:

LOVE HAS A FIRST AMENDMENT RIGHT AS WELL 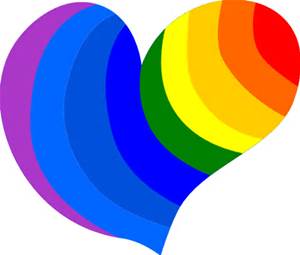 I am a regular supporter of the Southern Poverty Law Center (SPLC).  I have been for years.  They have often been at the forefront of the effort to expose and disable organizations promoting various hate-filled agendas.

Recently SPLC sent out a booklet to its supporters titled Ten Ways to Fight Hate. It lists and elaborates on ten actions individuals and organizations can undertake to help create a more loving world.  Suggestions include lobbying leaders for changes in laws, teaching tolerance and speaking up.  All of which are solid ideas, and proven methods for combating racism, sexism, and other forms of hate.

Very realistically the booklet acknowledges that things like hate rallies will continue in the future.  Indeed, as the booklet's writers state, "Hate has a first amendment right." But, they go on to suggest,  "Create an Alternative."  For while they don't state it this way, love, too, has a first amendment right!  It is one thing to engage in the anti-hate conversation with yet more hate and anger.  "What a bunch of idiots!"  "That candidate is a real jerk!" And so on and so on.  Ever pushing us further into the mud and dirt of despair.

So what alternative can you create?  How can you engage in something good, something positive, something that will contribute to greater understanding, greater tolerance and maybe even greater love? 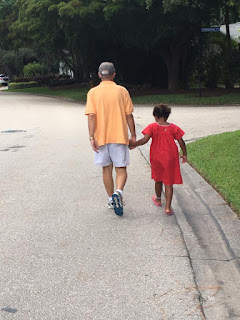 Near the end of our time together some of us went on a walk around our neighborhood.  My youngest granddaughter and I were up ahead of the others when the picture was taken that accompanies this blog.  It was only later that I knew she'd even taken it.  And it was after looking at it several times that I realized it provides something a visual parable.  Look closely, and you'll see my granddaughter and I are about to come to a fork in the road.  I have her by the hand, and I'm about to lead her one way or the other.  In fact she wanted to go to the right, but I told her we needed to stay to the left, so that eventually we'd get back home.  She happily acquiesced, and about twenty minutes later we arrived at home.  A bit sweaty (it was July in Florida after all) and having had a good conversation about life in general.

You see, what's a bit unsettling, is that she trusted me--completely.  She doesn't really know my neighborhood.  She could have easily gotten lost.  She could have gone down the wrong road, or gotten herself turned around.  And never reached home.  But Pop Pop was there to guide her, to take her by the hand and make sure we went in the direction we needed to go to get home safely.

So here's the unsettling part. As I see it  we (as a nation) are at a pretty big fork in the road .  We can choose to be people of love, or we can choose to be people of hate.  We can promote the worth and dignity of all human beings, or we can denigrate folks because of their religion, their race, their physical or mental limitations.  As adults, the choice is ours to make.  But make no mistake, the direction we head off in, will set the course for our children and their children as well.

We are holding the hands of our children, they trust us to know the right direction, so which way, America?  Which way?