325 Square Feet: A Word about Immigration 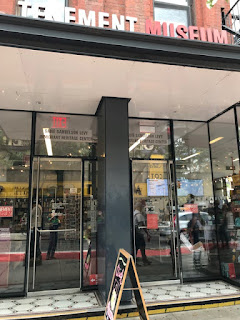 The Tenement Museum in New York's Lower East Side is devoted to telling the story of immigration.  Or maybe I should say stories.  For this tour-based museum purchased a tenement building at 97 Orchard Street in 1988, and has used it to tell the stories of a number of different immigrant families who once lived there.

The apartment we explored on my tour, called "Hard Times," focused on two families, one a German Jewish family who came to the United States in the mid-nineteenth century, and a Italian Roman Catholic family that lived in the same apartment decades later in the early twentieth century.  Both families lived through very trying times financially--the Depression of 1873, and the Great Depression of the Thirties.  Hence, the tour's name:  "Hard Times."

Our tour guide did a fine job bringing their stories to life.  She spoke of a husband who abandoned his family when he couldn't find work, another husband who kept the home fires burning after he lost his job, and two wives who stepped up to the challenge of supporting their families.  She told us about one family playing games on the kitchen table, and both families using outhouses in the tiny backyard.

The apartment they lived in was 325 square feet.  One bedroom, a parlor and the kitchen--shotgun style.  When the German family lived there it housed six.  It struck a real chord because throughout my high school years, my family of six lived in a very similar apartment--both in terms of square footage, and layout.  No outhouse--we did have indoor plumbing.  And electricity.  But still--it was tight.  I can only imagine what it would have been like if it had been as stripped down as the tenement apartment on Orchard Street.

Of course, there are many, many stories of much larger families, extended families, living in such places.  Not just in the past, but today.  Right here in the United States.  It is amazing, isn't it, what difficult conditions people will endure for a chance at freedom, a chance for opportunity.  There can be little question (at least in my mind) that immigrants, then and now, provide real strong threads when they are woven into our national fabric.  Might we never forget that as we debate the future of so many folks looking for what many of our ancestors longed for--and found--in times past.
Posted by John H. Danner at 5:39 PM 2 comments:

Thomas Jefferson and Me 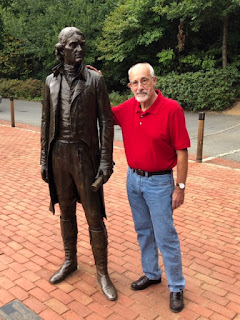 Our travels have taken us to the Shenandoah Valley in Virginia.  It is a gorgeous part of the country.  And today we visited Monticello, the home of Thomas Jefferson.  Our tour guide was excellent, and offered many insights into the house and the man who built it.  Well, figuratively speaking.  The actual construction, following Jefferson's instructions and architectural plan, was executed by the many hired workers and enslaved people who were owned by the third president.  And therein, of course, lies the rub.

The master of Monticello is best known for penning the stirring words in the Declaration of Independence. "We hold these truths to be self-evident," wrote Jefferson, "that all men are created equal, that they are endowed by their Creator with certain unalienable Rights . . . ."  All the while he owned well over six- hundred slaves over the course of his lifetime, emancipating only a few over the years, including the children of his slave mistress Sally Hemings.

That part of the Jefferson story has only been told at Monticello since the nineties.  Indeed the Hemings story, which is now highlighted on the estate, as well as in the narratives of the tour guides, was denied at Monticello until relatively recently.

To this day, of course, there are still those who would have us ignore our own history.  There are those who think we should just set aside any references to slavery (not to mention reconstruction, the Jim Crow era, and so on.)  But the sad truth racism is a very real part of our history.  America's "original sin," as various scholars have noted.  And our past is enormously complicated.  It is a mixture of the very best of human strivings and ideals, and that which is nothing short of abhorrent.  And we often find both in individuals, like Jefferson, as well as in society at large.

Our tour guide suggested that it is important that are honest in our approach to history, acknowledging the good and the bad.  And maybe, just maybe, we can learn something from it so that the mistakes of the past are not repeated.  True enough.  And today I am asking myself what can I learn from the story of Thomas Jefferson? 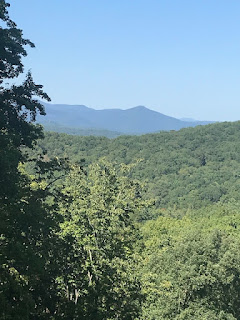 Linda and I are vacationing in the mountains of Georgia--beautiful country!  Somehow it seems appropriate that in my effort to read a biography of every president in chronological order that I am now in the midst of reading Redeemer, by Randall Balmer.  It is a very interesting take on Carter's life story, emphasizing his well-known devotion to his evangelical faith.

I was especially taken by a story referenced by Balmer in the section of the book I read this morning.  It was originally told by Carter himself in his book of meditations called Sources of Strength.

In the late sixties Carter had a renewed sense of dedication to his Christian convictions.  As a result he undertook two missions in 1968, going for a week to Loch Haven, PA and then later to Springfield, MA, to do door-to-door evangelism.

In Springfield he was paired up with Eloy Cruz, a Cuban-American pastor from Brooklyn.  Their assignment was to work with Puerto Ricans who had settled in Springfield.  Carter was very impressed with Cruz and his ability to connect with people.  Carter asked him how he was able to be so effective.  Finally, the somewhat reticent Cruz said, "Senor Jimmy, we only need to have two loves in our lives:  for God and for the person who happens to be in front of us at the time."  (Sources of Strength, xvii)

Now that's something to ponder while I'm here in the mountains of Carter's home state!
Posted by John H. Danner at 3:17 PM 1 comment:

Waffles, the Church and Hope 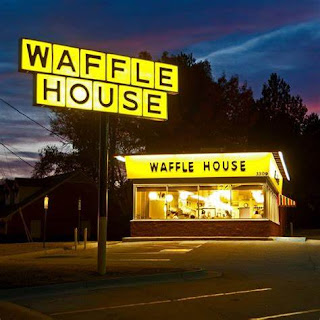 They are ubiquitous in our neck of the woods.  Almost every interstate interchange has one.  The bright yellow sign is unmistakable.  Waffle House.  The food is predictable, if not especially fancy.  The prices are reasonable.  And the servers are like diner waitresses of old--always ready to call you "honey" or "sweetie"!  And, according to an article in our local newspaper this morning, Waffle House restaurants are a reliable sign of how a community has fared in the face of natural disasters like hurricanes and tornadoes.

It seems local, regional and even federal officials call it the Waffle House Index.  If an area has basically escaped the worst of a storm's impact, Waffle Houses are up and running within hours.  If they are open with a limited menu, it means there has been a certain amount of damage.  And if the local Waffle House is closed, then a community has been devastated.

All this is due to the fact that the folks at Waffle House have a well-thought out and predictable well-executed plan for preparing and responding to the likes of Hurricane Dorian.  Specially trained people, a stock of appropriate equipment, and so on.

One of the people interviewed in the article said that an open Waffle House means "the community has hope . . . It means things might actually be alright.  It's like the sunrise after the storm."  (The News Press, 9-3-19, 9-A)