The Second Coming--Again (and Again and Again)

You've got to give Harold Camping a lot of credit. He's the radio preacher who predicted that the rapture would occur somewhere around 6:00 PM last Saturday. In the end, of course, he turned out to have been wrong--but still, he got us all talking about theology, and that, in my estimation is a good thing!

The doctrine of the rapture, a hotly debated theological concept, basically states that before the world is brought to a cataclysmic end, believers (variously defined) will be caught up into heaven and saved from the onslaught of disasters ranging from earthquakes to wars that will ensue. Frankly, I have a bit of difficulty believing in such a doctrine, it doesn't really fit into my understandings of how God works in this world. I certainly would defend the right of Camping and others to believe in it. I just can't buy it myself. But the Second Coming of Christ, that's another matter altogether. Let me explain.

Camping wants to pin it all down to a particular moment in time, but I'm more inclined to think it happens all the time! Jesus just keeps coming back again and again and again. One of his best known parables (found in Matthew 25) speaks about Judgement Day. And in that highly metaphorical account, he talks about those who are hungry or thirsty or or sick in need of clothing. Those who are judged righteous are those who provide help for those in need. In fact, he says, "Every time you did it to one of the least of these . . . you did it to me."

You see, I believe Jesus shows up in those we meet every day. The bratty kid who lives next door who needs someone to care about him. The crotchety old woman down the street who is in need of a friend. The hungry beggar on the corner who holds out a cardboard coffee cup looking for spare change. The woman with Alzheimer's who can't remember how to dress herself anymore. I believe if you see someone in need the Second Coming has happened once again.

The rapture, I suppose, is all about bringing some from earth to heaven. But I'm more inclined to believe that Christians are called to bring heaven to earth. And that doesn't involve any complicated chronological computations. Rather it means acting as if each person we encounter is Jesus.

So thanks, Mr. Camping, I might not have said all that if you hadn't started the conversation! Thanks for giving me cause to think and write about the Second Coming, even if I do believe it happens all the time!
Posted by John H. Danner at 12:15 PM No comments:

What's in Your Mailbox? 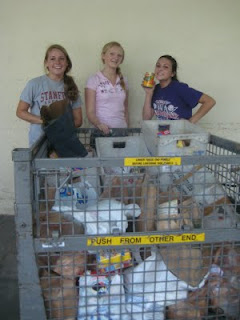 Members of our confirmation class and their mentors volunteered this past weekend to help out with the Stamp Out Hunger project. Its prompted me to think a bit about partnerships. Every year the Post Office spearheads an effort to collect food for food pantries all across the country, and they often invite others to help them in the work of gathering and sorting the food. The food itself comes from folks in the community who leave a box or bag of groceries by their mail box to be picked up by mail carriers or other volunteers, like our confirmands. There is a corporate sponsor, the letter carriers union supports the effort. Its really a pretty good example of partnership: private citizens, a quasi-governmental organization, not-for-profit service providers, labor unions, businesses and even church groups like ours, all working together to feed the hungry. Last year, according to the Stamp Out Hunger website, over 77.1 million pounds of food were collected. That's a lot of groceries!

My question is pretty simple. Why do we have so much difficulty forming such coalitions? Why do we find it so hard to work across the various lines that divide us? We need to get our collective act together and work together to eliminate the need for food drives and food pantries and Stamp Out Hunger Day. We need take advantage of the various strengths each sector of society brings to the table to address the pressing issues of the day. For clearly, when we do, we can accomplish great things!

I'd love to hear from you about other such partnerships. Maybe with more examples of such successes, folks will find the courage to step out of the comfort zone of their own ideas and organizations, and into the greater arena of cooperation!

Hidden in the Heart

There was a terrible accident here this past weekend. A cyclist crossing the causeway was hit by a truck that had veered into the opposite lane. She was an experienced cyclist, riding a familiar rote. But the blow was too great to handle, and she flew off her bike and over the railing into the water. She was pronounced dead on the scene.

When it happened Saturday morning, traffic was shut down in both directions for about two hours. No one could get on the island, no one could get off. Finally, when officials were done with their investigation, things opened back up, and soon, traffic patterns returned to normal. But for those involved in the accident, and for their families, things may never return to normal.

As we move through life, we often forget that those we encounter along life's way may be caught in the midst of one tragedy or another. How many people who we meet each day are quietly, even at times secretly, grieving one loss or another? Yet, they find themselves caught up in the flow of of so-called normal life! And so, go unrecognized and unsupported in their grief.

I have a therapist friend who once said, "You know John, 'normal' is just a setting on washing machines." He was right. There isn't really any such thing as normal. Every life is full of its own particularities. I suspect if we remembered that simple fact we'd all be better off. We'd all be a bit more patient with those around us.

Today, as one who has ridden on his bike across the causeway many times, I can't help but feel real sadness for the cyclist and her family. And, as one who has driven across the causeway even more times, I feel real sadness for the driver as well. And then there are the EMTs and the police officers and those who witnessed the accident. So many lives touched and changed in an instant. So many folks who will carry its scars for years to come. And that's just one accident.

If nothing else, might it remind us all to be a bit more patient, a bit more gentle, a bit more kind with those we meet--for who knows what lies hidden in their hearts?
Posted by John H. Danner at 11:39 AM No comments:

All morning I've been thinking about Jennifer. She was a young friend and parishioner of mine who died in the collapse of the World Trade Center on 9/11. She was an extraordinary young woman, with a bright future. She was in her late twenties, and had survived a life threatening bout with cancer. She was newly in love, and looking forward to a life filled with adventure.

Jennifer was also a deeply spiritual soul. I met with her often during the time she dealt with her illness. I shall never forget the day she looked at me with real conviction in her eyes and said, "If I should die from cancer, just let everyone know I don't blame God." It was such a mature remark from one so young!

Of course, it wasn't cancer that took her life, but rather hatred and violence.

I've been thinking about Jennifer, because I'm not sure how to think about Osama bin Laden. I don't know how to respond to his death. I ended up conducting three funerals for victims of the 9/11 attacks. And, living in metropolitan New York, I experienced first hand the chaos, confusion and fear that was rampant in those first months after the airplanes hit the towers. And like all Americans, I know how those actions have forever changed our way of living.

Like a 9/11 victim's family member I heard interviewed on television this morning, I am relieved that Osama bin Laden has been taken out of the picture. I am grateful to those who risked their lives to do so. Justice has been served, and that is good. But I don't see any of this as cause for celebration.

When it finally became clear that Jennifer had indeed died in the conflagration on 9/11, we had a Memorial Service and celebrated her life. That was appropriate. Her life was well worth celebrating. But Osama bin Laden's death is no cause for celebration. Rather, it is a cause for deep sadness. For it reminds us once again of the violence that is so real and present in our world. It reminds us of the hatred that is so much a part of life on planet Earth.

So I'm relieved. I'm grateful. I'm glad justice has been served. But I'm not celebrating today. Rather I am renewing my commitment to working for peace in our world. I think that's what Jennifer would have done.
Posted by John H. Danner at 11:16 AM 1 comment: