Who Needs Christ During Christmas? 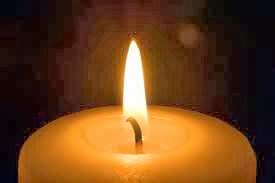 On the last Sunday in Advent, December 22,  the Sunday New York Times ran a story about how atheists move through this season of the year.  One group, the well-organized American Atheists, sponsored a video billboard near Penn Station that asked, "Who Needs Christ During Christmas?"  The billboard went on to answer it's own question.  "NOBODY" it proclaimed in large capital letters.
Well, I for one, would like to disagree.

First let me make a couple of things clear.  First, and foremost, I am a champion of religious liberty--which includes the right to have no religion.  Being an atheist is as protected a right in this country as being the most devout Christian, Muslim, Jew, Buddhist, Hindu or Wiccan!  Not only do atheists have the right to practice (or not practice) their beliefs, they have the right to talk about them, promote them, and encourage others to adopt them.  So I have no issue with the right to have such a sign--even if it is somewhat "in your face".

Second, I am well aware that while most atheists are not going to be so aggressive about their beliefs, there are a growing number of folks who don't believe in God and don't see a need for Christ in their lives.  Indeed, 20% of Americans, while not necessarily atheists, have no religious identity. (Fort-Myers News Press, 12-22-13, 7B)  Pollsters call them "nones".  Clearly, we who are religious, may need to do a better job of promoting the value of faith!

All that notwithstanding, however, I for one do need Christ during Christmas.  I need Christ during Easter and Memorial Day and even on Tuesday next.  I need the strength and courage that comes from knowing God has come to us and, as one of our liturgies puts it, "shared our common lot".  I need Christ because in and through him I have learned that there is more to life than meeting my own needs.  I need to keep Christ in Christmas and in every season of the year because without him I am selfish and self-centered and, to use a word I rarely use, lost.  No in some metaphysical sense of the word--I'm not talking about my eternal destiny here.  I just mean I don't know the way to go.  Without the road to Bethlehem, I live as if my GPS were broken.

So Happy Holidays--whatever they are for you.  And Merry Christmas--that's what it is for me this time of year.  Christmas.  And you can go your way, and I can go mine, and we can choose to get along. But for me, the way is one set by Christ.  And that's why SOMEBODY does need Christ during Christmas.  And at least one of those somebodies is me.
Posted by John H. Danner at 10:01 AM 1 comment:

Hat's Off to Hazel! 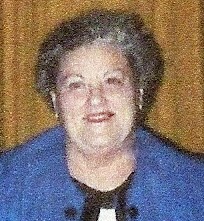 This is Hazel.  Hazel Cole Bradbury.  My late mother-in-law.  Actually I've had two of them (mothers-in-law that is)--both of them top notch.  I consider it very good fortune to have shared part of my life with both Shirley and Hazel.  But this is about Hazel.

Hazel had what could only be described as a challenging childhood.  Her father left her mother and moved away when she was a very young child, and so she spent most of her early years living in poverty.  It was the Depression era, and while her mother worked, they often found themselves barely making ends meet.

She met and married my late father-in-law, a good man indeed.  And while there fortune improved a bit, they still faced difficulties.  Cyril contracted pleurisy and spent months away from work and home at what was then called a sanitarium.  In time he got better.  He always worked hard, but they lived very modestly in half of a duplex in Gloversville, New York--a small industrial city north of the Mohawk River.

Hazel never forgot the challenges of her childhood and as a result turned her talents into hats and mittens and scarves for the underprivileged children of the community.  She tried to teach my wife, Linda, how to knit, but for years Linda resisted.  That just wasn't her thing!  But then, when her Mom was advanced in years, Linda sat down with her and learned a few basic stiches.  And she started to knit a basic hat. She took anybody's unused yarn--in many different colors, and stitched them together into colorful hats--first solids and then stripe
s.  And she followed in Hazel's footsteps--she made them for kids in need.  Literally hundreds of them every year!

Today, Linda knits about 200 hats a year--and she has a team of "elves" as she calls them, who also knit.  They send hats to an Indian reservation in South Dakota, to an organization that distributes them to homeless folks in New York City, to organizations in her hometown and for the first time this year, to Boston, where two of our grandchildren will see to it that they go to the right place.

All this because of Hazel.  That's why she calls the program Hazel's Hats.  What a wonderful tribute to a wonderful woman.
Posted by John H. Danner at 10:07 AM No comments: 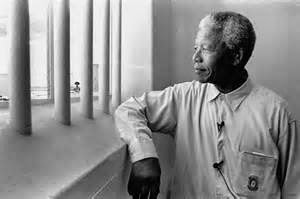 History has much to teach us.  And sometimes it simply boils down to numbers.  In this case, 19 and 27.

19.  That was the number of years Teresa of Avila had a spiritual dry spell.  Teresa was  a sixteenth century nun who was later canonized by the Roman Catholic Church.  She wrote one of the most significant books in the spiritual history of the Christian church.  Called The Interior Castle, it lays out a beautiful description of the inner workings of the soul.  In a day and age when women were relegated to powerless roles, Teresa found a way to make her mark as she founded many convents and them helped keep them afloat.  But for nineteen long years her prayer life was barren.  She felt little or no connection to God.  yet she persevered.  "Let nothing trouble you," she once said, "All things are passing;  God never changes."  She kept at it.  She operated on faith and faith alone.

27.  That was the number of years Nelson Mandela was imprisoned--eighteen of them on Robben Island in South Africa.  Plenty of time to work up real anger.  And plenty of reason to come out hating the folks who had jailed him.  Plenty of time to turn bitter.  But Mandela did not.  He even befriended his jailer.  "As I walked out the door toward freedom," he commented when reflecting on his time of incarceration, "I knew if I didn't leave my bitterness and hatred behind, I'd still be in prison."  In the end, he not only helped liberate people of color in his native land, he also did it in such a way as to redeem the oppressors. 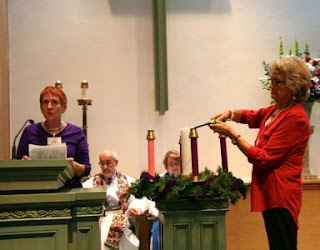 I don't know about you, but I sometimes find it difficult to know just when to get into the so-called "holiday spirit."  What with the media touting pre-Christmas sales even before Halloween, and the malls putting up decorations before Thanksgiving, I am always very tempted to delay my own thinking about the approach of Christmas as long as possible.

Yesterday was the first Sunday in Advent, and so we lit the first candle.  And Saturday we received our first card.  Sort of.  It came from our newspaper carrier--and included a self-addressed envelope in the hopes that we would send her a Christmas tip.  We will, of course.  She provides excellent service throughout the year and I rely on the two papers she brings us for news and information.

As I think about it, her card is an especially appropriate way to begin the season.  After all, while the news she brings isn't always good news, the Advent season itself is also
about news.  Good news.  Good news that the Messiah is coming!   And just as my paper carrier's card is designed to solicit a response on my part, so too the good news of the Advent season calls for action.

As you prepare for Christmas, might you reflect on the good news that the Messiah is coming.  And might it prompt within you a renewed commitment to live in hope, work for peace, share the joy and to love God and neighbor.