It's Christmas Eve, 2012, and there is much bad news from around the world.  Syria is engulfed in civil war--civilians were bombed over the weekend waiting in line for bread.  Congress and the President have all left Washington without an agreement to prevent us from falling off the fiscal cliff.  A Navy Seal in Afghanistan committed suicide.  More children were buried over the weekend after the shootings in Newtown, CT, while the NRA calls for armed guards in schools.  How can we even consider thinking, much less saying, "Merry Christmas!"

Yet none of this is new, indeed the first Christmas was a rather bleak time for the people like Mary and Joseph.  An unexpected pregnancy, poverty all around, their nation occupied by foreign troops . . . no, it wasn't a merry time back then either.  But still, when Mary ahd learned she would give birth to the Messiah, she sang a song of praise:  "My soul magnifies the Lord!"  And she held out hope that in and through him, things would get better.


The world is still full of evil and wrong.  Greed and corruption are real.  Hatred hasn't gone away.  But what the one born on that day so long ago taught us is that we can either give in to the bad or claim the good.  We can either break down and cry, or we can stand up and rejoice.  For the good news this and every Christmas, is that the bad news isn't going to win.  And even as Mary was mother to the Christ child, so we can give birth to the Holy One with every act of trust and kindness and love.  And bit by bit, act by act, the good news will triumph over the bad. 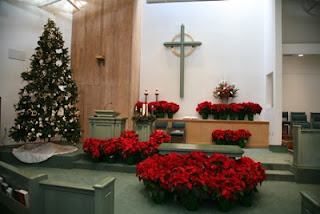 Saying "Merry Christmas" isn't naive--but it most certainly is an act of faith!  Faith that ultimately must lead to action.  So, "Merry Christmas!"  Might it be filled with promise as you move into the new year.

For Newtown: Songs and Sorrow

Our oldest grandson Zachary, who is now twelve, has taken up singing.  For much of the past year he has been taking voice lessons at a small studio in Fort Myers and this past Sunday he participated in his first recital.

Our local hospital has a spacious lobby, equppied with a baby grand, and from time to time they host such events.  So there in the midst of the hustle and bustle of a busy hospital, complete with PA announcements, Zachary and his fellow students sang and played a variety of Chrsitmas songs and carols.

Each of the young performers were dressed in their holiday best.  Lots of red velvet and satin dresses and bows for the girls, white shirts and ties for the boys.  Zachary wore his first suit--a handsom three piece number!  Some of the students played the piano, some sang, and some did both.  The selections ranged from simplified classics to traditional carols.  Zachary sang two pieces, "Deck the Halls" and the song Alvin and the Chipmunks sing at Christmas time.  He handled himself well.

All this happened on the Sunday following the shootings in Newtown, Connecticut.  And it was hard to watch and listen to the children sing and play without thinking of parents and grandparents who would never hear their little ones sing again.  One little girl, just about the age of the children at at Sandy Hook Elementary, couldn't pronounce the word "ride" and so it was "fun to wide on a one horse open sleigh."  She was adorable--and when she was done, she ran into her proud mother's arms.  How empty other arms in Connecticut must feel right now.

Much has been made of what we need to do to protect our chidlren in the future.  Much has been said about intorducing new gun control measures and improvements in our system of care for the mentally ill.  People have bemoned the violence in our culture, especially in video games.  Others have talked about better security in our schools.  And that's all well and good.  But we need to do more than just talk about it.  We who are parents and grandparents, aunts and uncles, friends and caring adults, need to be willing to work for the changes. For our children need to be in hospital lobbies singing their songs of the season, not in hospital ERs being treated for gun shot wounds.

Luminary Night on Sanibel, Light for the World

Here on Sanibel one of the most cherished traditions of the season is Luminary Night.  It is a time of celebration as islanders join together to create a magical atmosphere on Periwinkle Way, our "Main Street."  The highlight of the evening is the placing and lighting of what I'm told is over 1700 luminaria (paper bags, filled with sand and a candle.)  It is a beautiful sight!


As a member of the Sanibel-Captiva Rotary Club I helped put out the luminaria this year.  Two city trucks were loaded up with boxes of candles, white paper bags like you get at a bakery and sand.  lots of sand.  Then four Rotarians hopped in the back and started filling bags as we went down the street.  A fifth Rotarian (me) strategically (or so I hoped) dropped the bags along the the side of the road, about eight feet apart, and then, three other Rotarians followed behind straightening out the candles.  One such truck can from the East End of the island, the other from the west, until we met in the middle. Later a group of Kiwanians lit all the candles, and then, at the end of the evening, the local Lions Club cleaned them all up.

Meanwhile, many, many other folks (like my wife Linda at the Community House where she works) were singing along the way, selling goodies, offering up special treats--hundreds of Sanibelians were involved in the event.  It was beautiful.  A symbol of light in an often dark world.  But for it to happen, we all had to work together.  As I said to my fellow Rotarians as we sweated and strained putting out the bags, "The Chamber of Commerce could have a new motto:  'Luminary Night:  It doesn't just happen!'"

As we move further into this Advent season I pray that you will be one of those who help bring the light of love into the world.  I hope you will work for peace and justice.  I hope you will work to help make this a better world.  Remember:  it doesn't just happen.  It takes all of us doing our part--small as that may seem.  After all, who would have thought a babe born in a manger would make such a difference? 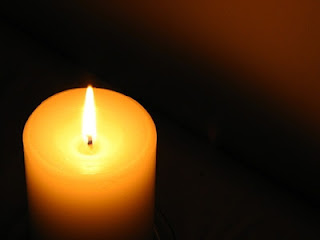 Catherine, Duchess of Cambridge is pregnant.  Despite the challenging bout of morning sickness she has faced, she has been looking forward to this.  She has wanted to be a mother, to have a family. 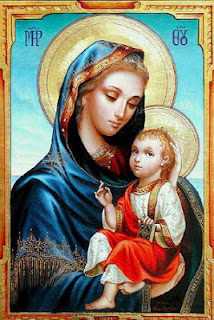 I wouldn't mention it except for the fact that this is Advent--that season in the Christian year when all eyes are on the pregnant mother of Jesus. No doubt preachers around the world will be pointing out the contrast between the situation faced by Kate Middleton and the one encountered by Mary of Nazareth. Privilege versus poverty. Fame versus obscurity.  Acclaim versus scandal.

But all that said, I can't help but wonder about the similarities. Did Mary suffer morning sickness?  Did she, despite divine instructions, consider a variety of names?  Did she look forward to motherhood--or did she face it with a measure of anxiety and concern?

I am teaching a course right now about Mary and reviewing her various titles over the years, including Queen of Heaven.  Kate Middleton may never reach those heights, but she is most likely bearing the future King or Queen of Great Britain. And all that is well and good.  But midst all the pomp and ceremony let us not forget that pregnant is pregnant, and motherhood, in the end, is far more about commonalities than differences.
Posted by John H. Danner at 2:17 PM No comments: