The Ball's In Our Court--What Are We Going to Do?

I get so tired of people saying we have solved the race issue in America.  We haven't.  We really, truly haven't.  And this past week we've seen to very high profile examples of the reality that racism simmers just beneath the surface of our national life.

No doubt you've heard about Cliven Bundy, the Nevada rancher who first came to public attention because of his struggle with federal authorities over unpaid grazing fees.  In an interview with the New York Times, he went off-topic, if you will, and started talking about a public housing project in North Las Vegas.  He commented on the African-American residents.  "I've often wondered are they better off as slaves, picking cotton and having family life and doing things, or are they better off under government subsidy?"  (www.chicagotribune.com)

I know, you're saying that's just one misguided rancher in Nevada.  But what about Donald Sterling--owner of the LA Clippers basketball team, who allegedly got in a verbal argument with his girlfriend over posting a picture of herself with Magic Johnson on Instagram.  "It bothers me that you want to broadcast you're associating with black people," he reputedly says.  And later, "Don't come to my games.  Don't bring black people, and don't come."  (www.tmz.com)  Yes sir, we've solved the problem!  There's no real racism in America!

I imagine there will be a fair amount of sputtering about both of these situations for a week or two.  Maybe the National Basketball Association will take punitive action if the allegations against Sterling prove true.  Bundy has already alienated those who were supporting him in the grazing fees fight.  But then we'll probably just sweep it all under the rug and go on as usual.  Content to let the problem simmer without really addressing it.  But we can't let it go--we only fool ourselves when we do!  Rather we need to promote a national dialogue.  We need to get the issues out on the table and be honest with ourselves about the horrors of the past (slavery was just that, a horror) and recognize the long lasting impact it has had on American life.  And then we need to repent.  As a nation.

In Greek the word for repent, metanoia, means to turn around and go in a new direction.  That's exactly what we need to do. But first we need to acknowledge where we've been.

The ball's in our court--now what are we going to do?

An Answer to My Prayers 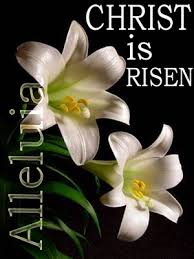 I am not one to pray for specific things for myself.  I pray everyday for others.  I happily offer up intercessions on behalf of he sick, the grieving, those who are hungry.  I pray generically for peace and justice to prevail.  But I don't usually pray for me.  I don't offer up very many petitionary prayers, as they are called.

But this was a very long and at times challenging season.  And Lent, for some reason, had been especially draining.  And as I approached Easter Sunday, I felt spiritually bereft.  I wasn't looking forward to celebrating the Resurrection--instead, I was looking forward to taking a nap that afternoon.  So I prayed that I might move through Easter and find a bit of renewal for my soul in the services that morning.

My prayers were answered.  And then some.

It all began at our 7:45 AM service.  It's a rather stripped down affair--no hymns, a shorter liturgy, and the only music being provided by a volunteer pianist who faithfully plays each Sunday while he is here in season.  Easter was his last Sunday this year.  And he played his own arrangement of several hymns--beginning with "The Old Rugged Cross" and then moving on to "Were You There" and "Up from the Grave He Arose."  He concluded with "Christ the Lord Is Risen Today""--my favorite Easter hymn.  It was absolutely lovely.  And it was, as are all of John's preludes, a labor of love.  It touched my heart and my soul as it mirrored my own journey this year.

At our 9:00 and 11:00 AM services our opening hymn was accompanied by a splendid liturgical ribbon dance, presented by one of our young people.  Tricia has done it for four years now, and through it we've watched her grow into an accomplished young woman.  Her twirling ribbon punctuated each and every "Alleluia!"  I silently wept for joy.

Our second and third services both concluded with a piano/organ duet which has also been a part of our Easter celebration for several years.  The organ part was played by our church organist, but the piano part is always played by a wonderful retired organist and member of our choir--Wanda.  It's been a challenging year for Wanda as she has had to deal with the loss of her husband of many decades, and then a few months ago, shoulder surgery.  She was really unsure if she would be able to play or not.  But she did!  With great force and beauty.  It was a stunning postlude, and as I greeted folks after the service tears trickled down my cheek.

A Response to Kansas

It doesn't always happen this way, but this year it does.  Passover and Holy Week overlap.  As Jews around the world are remembering the story of the Exodus, Christians are recalling the last days of Jesus on earth.

Over the years the Holy Week story has often been told in ways that foster anti-Semitism,
which of course, makes little sense.  But when does hatred ever make sense?  Jesus was a Jew.  His followers were Jews.  If you hate Jews then you hate Jesus--no matter what you say otherwise.
In this time in which we should be remembering our common heritage as Christians and Jews it especially tragic that a gunman in Kansas has lashed out in hatred.  Every year we Christians must be attentive to how we tell the story of Holy Week--perhaps this year, even more than ever, we need to remember the one we call Savior and those who carried out his work, were Jews.
Posted by John H. Danner at 9:54 AM No comments:

In Season and Out---The Rhythm of Life

Folks are starting to head up north.  It is still "season" here on Sanibel--as opposed to "off-season"--but things are beginning to taper off.  Every Sunday several of our seasonal residents tell us it is their last Sunday until next season.  Some will come back as early as September, most will return in October or November.  And a number will wait until the holidays are past and arrive in January.  There is always a lot of coming and going here on the island--and at church as well.

Over the four plus years I've been here I've thought about that seasonality a lot.  It impacts everything we do.  A few Sundays ago we had 570 in worship.  This August it could dip below 100.  Right now we have three services on Sunday morning.  In the summer, we'll have just one.  Even our boards and committees take a four or five month hiatus.  I've already met with some that won't reconvene until October.

I miss the folks who leave each year.  I miss the excitement of a full and busy church schedule.  But I also look forward to the slowing down which comes in June.  I have yet to fully master the rhythm--I don't take full advantage of the off season "lull"--and I've been known to run myself ragged in February and March.  But I'm working on it.

The seasonality, of course, is not just my life right now, it is also a metaphor for life, period.  There are highs and lows, times of great drive and energy, and times when things quiet down.  It is all so clichéd--yet all so true.  And in many ways we spend our whole lives adjusting to the rhythms!  But like a piece of complicated music, the minute you get used to the rhythm, it changes yet again.  And while it may be a bit frustrating at times, it is also what makes it all so beautiful!
Posted by John H. Danner at 2:16 PM No comments: