On Home and Hearts

Sherwood.  That was my mother's maiden name.  Her parents, Sue and Robert Sherwood, are both buried in Park Lawn Cemetery in Bennington, Vermont.  My grandfather, Robert, died in 1961, when I was just seven.  As his grave marker reminds all who see it, he was a veteran of World War I.  He was in the Medical Corps, and a corporal when he got out and finished his studies at Harvard.  My grandmother Sue lived another twenty-seven years and was a major part of my young life.  I had the honor of officiating at her funeral, next to my Dad's, the hardest funeral I've ever done.


I visited their graves this week while on vacation in the Berkshires.  My mother, who was raised in Bennington, moved away in the early fifties, and never lived there again.  To the best of my knowledge, we have no living relatives in Bennington. And while I visited often in my childhood and young adulthood, I never lived there myself.  But I've moved around a lot over my lifetime, and Bennington was a constant.  It was the closest thing I had to a hometown.


As my wife Linda and I placed flowers on my grandparent's graves, I offered a brief prayer of thanks for having had them in my life.  My grandfather's love of literature, my grandmother's concern for the environment--things that remain with me to this day.  But as I reflected on how spread out my family is--Nebraska, Kentucky, Michigan, New York, Massachusetts, Florida--I realized that home is indeed, where the heart is.  And my heart is in many places.  Not divided, but rather enriched by the diversity of people and places that are a part of my life.
Posted by John H. Danner at 10:24 AM No comments:

My grandmother's brother was named Jim.  Jim Huntington.  He was a big man--and he loved to laugh.  He ran a garage--a Texaco station--in Vermont.  And his wife, my Great Aunt Ruth, kept the books.


Uncle Jim and Aunt Ruth had a cottage--a camp, as we New Englanders called such places--on Lake Champlain.  And every year for many summers my family would spend part of August with them there.  And Aunt Ruth did most of the cooking.  There was always lots to eat.  Meat, potatoes, and corn on the cob, the golden produce of late summer.  And baked goods.  Aunt Ruth made the best yeast rolls, marvelous cakes and pies.  It was, as they say, "to die for."


Uncle Jim loved Ruth's cooking, as his round belly proved every time he pulled up to the table.  But he was forever teasing her about it in the way that husbands sometimes tease their wives.  It was gentle, and good natured.  I think it was his way of saying "I love you, Ruthie!"  That's what he called her, "Ruthie."


One day, at the age of ten or so, I decided to join in the fun.  And so I started to heckle Aunt Ruth about the way she'd burned the supper.  She hadn't, of course.  I was just teasing, like Jim did all the time.  But Ruth didn't take it that way. In fact, she burst into tears and ran out into the kitchen.  Someone went to get her, to urge her to come back to dinner while my Dad took me aside and made it very clear that while I may have thought it was all in good fun, Aunt Ruth hadn't.  In fact she was very hurt.  I apologized, and Ruth forgave me my ignorance, and so it we resumed dinner.


I think I've told this story before, here in the pages of this blog.  But it's August--and I'm on vacation--and so it's little wonder I thought of it when I saw a report in today's paper about a poll taken by the Pew Research Center.  It seems that among blacks, 80% feel that the situation in Ferguson, Missouri "raises important racial issues," while 37% of whites think it is "getting more attention than it deserves."  (USA Today, 8-22-14, 3A)


I didn't think I was saying or doing anything wrong when I teased Aunt Ruth.  But Ruth did.  And so we had a problem.  A real problem.  The sort of problem, had it not been properly handled by Uncle Jim and my parents, which could have resulted in a serious family rift.  (Such things happen all the time!)  Whether you think we have a problem in Ferguson or not, whether you think it raises racial issues or not, the fact that so many people do means it does.  Period.  And how it is handled will make all the difference in the family called America. 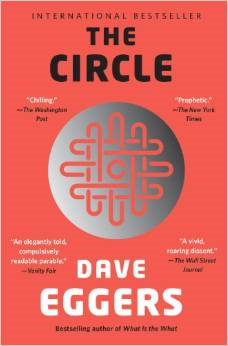 I recently finished a very disturbing book, The Circle, by David Eggers.  It is a work of science fiction set in the very near future.  And I just can't get it out of my head!

The Circle in the novel's title refers to a fictional corporation modeled after Facebook.  One of the founders of the company even wears hoodies!  The basic question posed by the book is "What happens when every part of our lives is online?"  The Circle is initially presented as a very positive influence on the world.  But as the book goes along one becomes increasingly concerned by the far reaching consequences of its move into every facet of life.

Two issues that surface in the book really gave me pause.  The first had to do with the addictive quality of the virtual world.  How easily we fall into compulsive behaviors when it comes to things like checking e-mail, social media sites and so on.  The second had to do with the ongoing issue of privacy.  How much privacy do we have any more? Total transparency is lifted up as the highest good by the Circle.  Folks are expected to reveal all to the world.

I don't know about you, but I have things I really don't want to share with my best friends and family, much less complete strangers.  And I'm willing for others to have such private thoughts and ideas.  I'm an introvert--I need time to process things that cross my path.  Social media encourages instant responses.  responses that are not always well considered.  I find it all a bit unsettling.

I encourage you to read Eggers book.  You may not like it.  You may not like what it suggests may happen if we continue to follow the virtual path without real consideration of its implications.  But I am sure it will give you much to consider.

Sitting in a Pew--Part II

I spent the weekend at my Mom's in southeastern Kentucky.  It's a part of the world where church is serious business.  Everywhere you look there are signs (literally and figuratively) that indicate these are church going folks.  I saw several billboards, for instance, that all proclaimed in huge letters "Talk to God--Sundays 11:00 AM"

Every couple of miles along the highways one sees signs pointing up into the hills (the hollers as they call them there) indicating the presence of one small church or another.  Many of them are Holiness Churches.  Others are independent, non-denominational congregations.  And most of them have Baptist in their name:  Roadside Baptist, First Baptist, Turkey Creek Baptist . . . you get the drift.  And all of them are very evangelical in their theological understandings.

It's not an easy place to be a mainline congregation.  But they do exist.  United Methodists and Presbyterians and Christian Church (Disciples of Christ) for the most part.  Often they are small, struggling congregations.  Doing their best to offer some theological alternatives in a place dominated by biblical literalism.

Mom is part of just such a church.  It's a little Disciples of Christ congregation that considers it a really good Sunday when thirty folks are in attendance.  Their part-time pastor is a seminary student who divides his time between working for the church and working on his degree.  He is a good and imaginative man.  And the congregation knows it.  They consider themselves fortunate to have him.

I've been to Mom's church many times before, and so was warmly greeted by several parishioners when I walked in the door.  I came a bit later than Mom.  She is the regular lector, and had gone to church a bit early to set up her reading.  But I wasn't the only one greeted in such a fashion.  I don't think anybody, not even the young high school student who was coming for the first time, walked through the door who wasn't greeted by at least three or four others.

As the service proceeded we sang several old chestnuts:  "Blessed Assurance,"  "I Am Thine O Lord" among them.  We used the denominational hymnal, Chalice, a very fine hymnal.  There was a sound system--but no overhead projections.

I realized as the service went on that a third of the congregation, there were twenty-five of us on Sunday, was involved in leading the service.  The only two children in attendance lit the candles, others read, served communion, said prayers at the altar, led singing . . . . it was very participatory!

There wasn't a lot of glitz or glamor.  But at prayer time, folks were invited to share their joys and concerns, and they did.  We offered up prayers for a couple just passing through town with an "anonymous concern" as well as for long time members who were ill.

As the service ended and folks started to leave--well, they didn't.  Everybody stood around the sanctuary chatting with each other.  The young man with a bandanna and beard who sits in the balcony by himself every Sunday.  The young college student from the nearby liberal arts college.  The elderly widows and grandparents.  Everybody seemed to know everybody else.  And clearly they enjoyed being with one another.  They were almost loath to go!

I think it was church guru Lyle Schallert who once labeled a congregation the size of Mom's a family church.  And that is so apt.  Like any family, they have their squabbles, I'm sure.  But like a good family, they stick by one another.  Coming to church for worship on Sunday is like a reunion.  A family reunion.

All the years my Dad was disabled the women's Bible study--they call themselves the Friends of Jesus Bible Study--met at my mom's, to make it a bit easier for her to participate.  When Dad died, they just continued to meet at Mom's--that is until another of the group's members had to care for her home bound husband.  Then they moved to her house.  That's the sort of thing family's do, isn't it.
Posted by John H. Danner at 3:04 PM No comments: