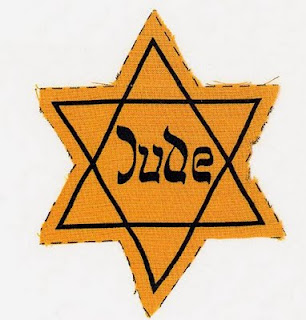 This coming Sunday is Yom HaShoah, Holocaust Remembrance Day. It is a time set aside to recall the horror of the Holocaust so that we might work to see that it is not repeated.

Hitler and his cronies managed to convince many, many people that Jews were somehow less than fully human--that they threatened the well-being of the state. The way, the Nazis argued, to protect the state was to isolate the Jews. So over a period of only a few years, various laws were passed which created a very clearly second-class citizenship for Jews. And to make certain everyone knew who the Jews were, each and every Jewish individual was required to wear a yellow star of David.

A yellow star may seem a little thing, but it led, eventually to Auschwitz. And so the question we must ask, if we are to learn anything from all this, is where are the yellow stars in our lives? Where and how are we labeling and branding people? What divides us one from the other.

One of the many films that documents part of the story of the Holocaust is The Hiding Place. It is the story of a Christian Dutch family named ten Boom that hid Jews during World War II and helped them escape from Nazi persecution.

The early part of the film documents the Nazi invasion of the Netherlands and shows how the anti-Semitic policies of Hitler were put in place. In one scene the camera zooms in on a line of people waiting to receive their yellow star. Standing in the line is Papa ten Boom--but he is a Christian. Standing beside him is one of his Jewish neighbors. He turns to Papa ten Boom and says, "You shouldn't be here."

"They are for Jews," says his neighbor, "You don't have a J on your card."

"You could get it for me," replies ten Boom, "If we all wear them they won't know a Gentile from a Jew."

Ten Boom did get a star--and he wore it. And, in time, he was caught rescuing Jews, and was shipped off to one of the camps where he died.

We may not be called to, as Papa ten Boom was, to risk our lives. But we are called to make meaningless the yellow stars that exist in our own day. We are called to work towards a time when all people are treated fairly and equally. Not just on Yom HaShoah, but every day.
Posted by John H. Danner at 2:32 PM No comments: 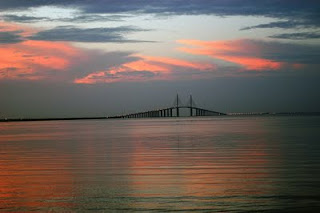 A little over a week ago, at about 4:30 PM, my wife Linda and I were in Tampa, and on our way out of the city, traveling south. We crossed the Sunshine Skyway Bridge, part of the magnificent series of bridges and causeways that cuts across Tampa Bay. As we approached the bridge, traffic was backed up, and as we drew closer we realized that there was a driver pulled over into the breakdown lane, obviously experiencing car trouble. There was very little space between his car and those of us passing to the south.

"Boy, that's a tough place to break down," I said.

"Yes," said Linda, "but its a great place to see the sunset!"

What a perfect illustration of the old adage about cups being half empty or half full! I trust the poor fellow got help fairly quickly, and didn't actually have to stay on the bridge until sunset (some three hours after we saw him!) But, if he did, I hope he was able to enjoy the beautiful view!

There are a lot of broken down cars along the road of life, a lot of times we are stranded in traffic. But the sun still rises and sets each day. The stars come out at night. The waves lap against the shore and the winds whistle in the treetops. Sometimes we are so caught up in the difficulties of life that we forget the beauty all around us. Maybe just for today, you can take a few moments to stop and look and listen. Yes, its a troubled world--but it is also a blessed world. The challenge every day is in deciding where to focus our attention!

(Photo courtesy of the City of St. Petersburg, Florida)
Posted by John H. Danner at 11:39 AM No comments:

Fallout from the Nuclear Crisis in Japan

Back in 2004, Stanford economist Paul Romer addressed a group of venture-capitalists. In his speech he noted the increased level of competition the US is facing in the world market due to the fact that education levels are rising in many countries around the world. Referring to the situation Romer said, "A crisis is a terrible thing to waste." Since then its been quoted by many, and paraphrased by others.

Well, today, in 2011, we've got another we've got a crisis on our hands, this time in Japan. The dangers presented by the problems with the nuclear reactors damaged by the earthquake there haven't even been fully calculated. No one knows for sure the extent of the damage, nor the future impact. While villages may need to be closed down. The water supply may be permanently poisoned. More people may yet die. What more needs to happen for us to realize that now, not tomorrow, is the time for us to take a serious look at the whole question of nuclear power, which in turn means, getting serious about addressing the energy issue. Yet the skeptic in me suspects this will be just one more news item that eventually gets replaced by another crisis. Like last summer's oil spill, we'll worry about it for a while, and then move on to something else.

I've been told that the Chinese word for "crisis" is made up of two characters, one that represents the word "danger"--and the other which represents "opportunity." The question is how do we view a crisis? Do we cower in the fear of danger? Do we close our eyes and pretend it isn't really happening? Or do we see a crisis an an opportunity to move in a new way? To create a new thing? Maybe its time to really embrace the fact that this is a global problem--one that ultimately can only be solved by a truly international effort.

A crisis is a terrible thing to waste. It can turn into even greater problems--but it can also cause you to stop and to think and to find the courage to move in a new direction. I pray that's what happens with this crisis. I hope that's the fallout.
Posted by John H. Danner at 3:22 PM 1 comment: