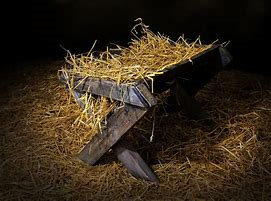 Yesterday's edition of the New York Times had a front page story reporting a recent rash of thefts being experienced across the nation.  In small towns and larger cities, folks are stealing the baby Jesus from nativity scenes erected on public squares and in front of churches.  Occasionally, the Times reports, Mary or a donkey goes missing as well, but most often it is the infant.

To counteract these acts of vandalism, officials are finding all sorts of creative ways to secure the baby to the crib.  In some instances a little bit of superglue seems to do the trick.  Others have used ropes and wires to hold him in place.  And still others, going high tech, have installed GPS systems in the little one. NORAD has been tracking Santa's flight from the North Pole for over sixty years now (and, according to NPR, still will, despite the government shut down!)  So why not track the Holy One of Bethlehem?

One of the thieves was caught red-handed, according to the Times, as she was spotted by a police officer"cradling something" near the spot where the Christ Child had been taken.  It turned out to be the Baby Jesus.  Now don't misunderstand, I'm not a fan of vandalism, but I was struck by that phrase, "cradling something" and I couldn't help but wonder if she was simply a lonely soul, seeking the comfort that can come from holding a child in ones arms?  Maybe a grieving mother, or a person suffering from mental illness.

I do hope the various creche figures are found and restored to their original positions.  But more importantly, I hope that this Christmas we recommit ourselves to finding all the folks who've been stolen away by domestic violence, addiction, poverty, racism, grief, mental illness and despair.  I hope that we might find new ways to cradle them with love and care.  Somehow, I suspect the baby
Jesus would consider that a noble goal, one worth every effort. 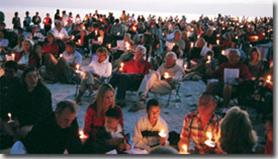 For many of my clergy friends and colleagues Christmas Eve means putting on boots, donning a heavy jacket, and making ones way out the door for a service late in the evening on a cold winter's night.  For me, however, it means leading an outdoor service on the beach for some fifteen hundred folks--give or take a few dozen.  We gather just before sunset, and as we celebrate the coming of Light into the world, we are awestruck by the beauty of the skies as the sun sinks into the Gulf of Mexico.

Our annual Christmas Eve Beach Service is my congregation's gift to the community.  It takes some eighty or so volunteers, and costs a fair amount of money for transportation arrangements, and police coverage for the event.  We do take up an offering, but all of the proceeds go to support the work of FISH, a local agency working with needy families on Sanibel and Captiva (yes, there are folks in need, even here--especially this year after summer business tanked due to red tide) and the Salvation Army.

It is a very simple service, we sing some carols, I tell the old, old story, a soloist sings "O holy Night" and then we light candles.  Hundreds of them.  Just off shore a handful of boats gather as their occupants follow along with the service, and on land, grandmothers and grandkids, and singles and couples, and all sorts of folks sit on beach chairs, or towels, or directly on the sand.  It is quintessential Sanibel.

I never know for sure who's out there, who's going to be listening as I recount the tale of Mary and Joseph, the story of the shepherds and angels.  There are, of course, my own parishioners, and others folks I know from the island--even some of my Jewish friends show up.  But a lot of the folks are tourists, just passing through.  Folks who've been fortunate to find a room at the various inns and condo developments that dot the island.  Folks from nearby parts of Florida, and folks who have come from distant lands, like Magi making their way East.  (Or West or South, in most cases.  Lots of Canadians, and Germans and folks from the UK).  It is a rather diverse gathering of people, all sufficiently moved by an ancient story and the promise of music and candlelight and a lovely sunset to come and share the moment with us.

We will open with "O Come All Ye Faithful," just like every year before, and we will set aside our sectarian interests and just assume the mere showing up is a sign of faith itself.  Which, in the end, may be true of a lot of life.  Sometimes the best way to demonstrate our faith is simply by showing up.

Feel free to join us if you're in the neighborhood--the service is held at Lighthouse Beach and starts at 5:00 PM.  But show up earlier--all those faithful folks fill up[ the parking lots pretty quickly!

Lessons Learned from Dad and a Dried Out Tree

My Christmas tree is already up at home.  I spoke about it in my sermon this past Sunday.  And it made me think of a Christmas long ago, when I was just nine.

I was in the fourth grade, and a devoted student of my teacher, Miss Barrett.  Like most all classrooms in that time, ours was decorated for most of December with snowflakes we'd cut out of white paper, and chains of red and green construction paper rings.  And, of course, a decorated tree.  Not a plastic tree, mind you, but a real live pine.  It stood in the corner of the classroom for two or three weeks before Christmas.  Then, on the last day of school before our vacation, we had a class Christmas party.  We exchanged our no-more-than-one-dollar-a piece grab bag gifts , sang some Christmas songs and then ate the cupcakes our room mother had made that left us with green lips and red tongues.

I am not sure what possessed me to ask, but as we filed out after the last bell, midst shouts of "Merry Christmas," I asked Miss Barrett what would happen to the tree.

"Oh," she said, "The custodian will put it out in the trash."

Suddenly I had a nine-year old's flash of inspiration.  We never got our tree at home until the last minute on Christmas Eve, maybe . . . .

"Could I have it?" I asked.  Imagine, I thought, how pleased Dad will be to get a free tree.  He was, I must admit, a real penny pincher, and in retrospect I am sure that was part of his reason for waiting so long each year before buying one.  But in fourth grade I didn't think of that.  I just though how pleased he would be at his oldest son's ingenuity.

It also didn't occur to me that the tree was already pretty dried out.  In my excitement I didn't even notice all the needles I was leaving behind me as I dragged it home through the snow.  And it never occurred to me--not even once--that I might be upsetting my Dad's own enjoyment of our longstanding tradition.  But that Christmas was not destined to be quite as Dad had planned.

"That's great, John," he said when I showed him the tree.  "Good thinking!"  And best of all, I overheard him telling another adult how clever I had been.  For me it was one of the best Christmases ever.  All because my father--not known as a flexible soul--had been able to deal with the unexpected--and not just deal with it, but embrace it as well.  But that's certainly appropriate, for the Christmas story itself is all about the unexpected turns in life, and how ordinary folks like Mary and Joseph and the shepherds, not only dealt with those turns, but like my Dad, embraced them as well.

Thanks Dad--what a great way of showing me a profound truth!
Posted by John H. Danner at 3:14 PM 1 comment: 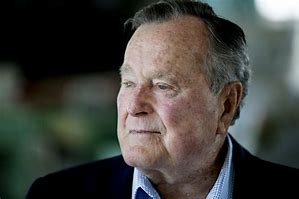 All across the nation yesterday morning Christians gathered to observe the first Sunday in Advent.  It is a season of preparation for Christmas.  The Advent season is marked by lighting an additional candle each of the four Sundays before Christmas, an ever growing light as we draw closer to the birth of Christ. 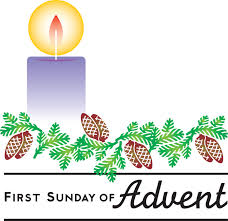 Last night many other Americans, Jewish Americans, gathered to observe the first night of Hanukkah.  It is an eight-day celebration of religious freedom, also marked by the lighting of candles, one for each of the eight nights of Hanukkah.  With each passing night the light grows brighter and brighter. 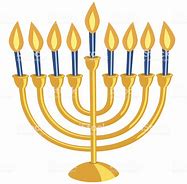 It struck me as somehow appropriate that George H. W. Bush died over the course of this past weekend when so many candles were being lit on Advent wreaths and Hanukkah hanukiah.
For it was Bush who famously compared the work of volunteers to "a thousand points of light."

I looked up his acceptance speech from 1988 in which he first used that analogy.  He spoke of the importance of community, and then he said, "This is America: the Knights of Columbus, the Grange, Hadassah, the Disabled American veterans, the Order of Ahepa, the Business and Professional Women of America, the union hall, the Bible study group, LULAC, 'Holy Name" . . . a brilliant diversity spread like stars, like a thousand points of light in a broad and peaceful sky."

It is a wonderful image, a wonderful reminder that despite our many differences, each and every one of us brings a bit of light into the world.  A bit of light we have a responsibility to share with others.

And George H. W. Bush did just that.  While you may not have agreed with everything he said, nor everything he did, while you may never have voted for him, it is hard to argue with the fact that over the course of his lifetime, a lifetime devoted to serving others, he did indeed share his bit of light with the world.