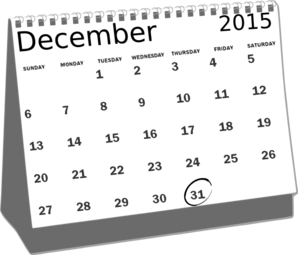 So Christmas has come and gone--Christmas Day, that is.  Technically we are still in the season of Christmas.  But we in America are so quick to pack up the decorations, put away the lights, turn off the special music and move on to preparing for the Super Bowl (usually brushing past Martin Luther King, Jr. Day with a mere nod of the head in the direction of civil rights or black history.)  I am not opposed to the Super Bowl, I just think we shortchange ourselves!

We feasted through Advent, with office parties and family parties and neighborhood parties and school parties and, well you get the point!  And so we were worn out by the time we got to Christmas Day itself!  We will rally a bit for New Year's Eve, but that is mostly an excuse for excessive drinking, late night partying and journalistic pontifications about year's best (those ubiquitous "Best of" columns) and the year ahead diatribes (you know, "Forecasting 2016" articles).  And as for Epiphany?  Aside from our Hispanic neighbors who enjoy the day as El Dia de Tres Reyes, most of us forget it even exists.  January 6th, a holiday?  What's that?

It's sad, really, that we've lost the fasting/feasting cycles of life in postmodern America.  There are, of course, those who fast unintentionally, the poor, the hungry, the homeless, and those who engage in non-stop feasting, indulging in every whim.  But intentional fasting, going without, and intentional feasting, enjoying the good things of life in a healthy, happy way--that's a lost art for most.

As I move into 2016 I wonder how I can rectify that in my own life.  Maybe you'd like to join me.  Maybe we can use the rest of Christmastide to figure it out!
Posted by John H. Danner at 7:20 PM No comments:

Branches of Hope and Tree Trunks of Faith: An Immigrant Christmas

Like hundreds of thousands of other German immigrants, Heinrich  had come to this country early in the last century in hopes of finding a better life.  He'd been apprenticed to be a cabinetmaker, and hoped to use his skills to provide for his family.  While he was here his son, Walter, was born--and life looked promising.

But then news came of a sudden death in Germany, and Heinrich, by now known as Henry, got word that he had inherited a chicken farm in the homeland.  So back he went.  And things went well, at least for a bit.  But it was a time of growing unrest in Germany.  A time when evil was on the rise; when neighbors were being pitted against neighbors by a madman known as Der Fuhrer.  And Henry could not stand the distorted reality called National Socialism.  So he gave up the farm and his inheritance, and with his son Walter in town, returned to America.

They found a tiny attic apartment and scraped by on Henry's meager earnings.  They were good Lutherans, and normally looked forward to Christmas with its special music, and of course, the tree.  After all, wasn't it Luther himself who started the tradition of decorating a pine in honor of Christ's birth?

But money was very tight, and there were other things to worry about.  Still, Henry wanted to keep the tradition alive, if not for himself, then for his eight-year old son.  So he scraped together what little he had, twenty-five cents in all, and went out late on Christmas Eve to look for a tree.  Finally he found a tree seller still open.  He was down to his two last trees.  And a very sorry sight they were!  Both of them were scraggly at best, with only a few branches each.  One of them was as crooked as the Rhine River.  But the second, at least, had a trunk that was straight and true.

Maybe the seller was tired, or eager to get home.  Whatever the case, a deal was struck.  And Henry took both trees for a quarter.

He and his son Walter dragged them home.  And then, undeterred by their scrawniness, and using his carpenter skills, Henry cut the branches off the crooked tree, drilled hole in the trunk of the other, and soon assemble a fine looking specimen.  It was a Christmas tree to make old Martin Luther proud, but it was more than that.  For it was, in retrospect, a symbol, a sign, a reminded that the importance of facing the unexpected twists and turns of life with courage and honesty.  For time and again, Henry did just that.  He embraced the unexpected, and over time, assembled a life that would provide branches of hope, and a tree trunk of faith, not only for young Walter, but for his daughter as well. Henry's granddaughter.  Who told me this story many years later, as we sat one December afternoon in her living room.

My Christmas prayer, for each of you, my dear readers, is that you too might face the unexpected twists and turns of life with courage.  Might you too create branches of hope and tree trunks of faith.

Meeting God at the Mall

This time of year, one often is flooded with memories of Christmas seasons past.  One such memory for me involved a young woman from one of my former parishes, who was living far from home.  She was facing a very difficult pregnancy and, just before Christmas, her unborn baby developed some very serious complications.  First she was rushed to a local hospital, and then to a specialty unit in Philadelphia.  It was vey touch and go.  To treat the fetus meant putting the mother at some real risk.  But she and her husband clung to hope.

Meanwhile, the young woman's mother-in-law was in Northern New Jersey.  She was able to pray.  She did her best to support her son and daughter-in-law with visits and phone calls, still, she was worried.  More than that she was afraid.

But Christmas was coming, and she had things that needed to be done, including some last minute shopping.  So with a heavy heart, she headed off to the mall.  She wrestled the traffic, found a parking spot, and was exhausted before she even got inside.

As she passed though the mall hallways, she came across a group of children singing in one of the courts.  She sat down to listen, and soon the poignancy of their Christmas carols just washed over her, and she began to weep.

One of the children's moms was seated next to her.  She reached over and gently touched her arm.

"Are you all right?" she asked.

With that it all came flooding out:  my friend's fears, her worries, her tears.  But lo and behold, the singer's mother was a woman of faith, and within seconds, she gathered up three of her friends and right there in the middle of the largest shopping mall in New Jersey, they prayed for a woman they had just met, her daughter-in-law a hundred miles away, and a baby not yet even born.

After my friend finished telling me the story, which she gave me permission to share with others, she said, "You know, John, I'm sure God sent those young mothers to tell me, "You know where I am, and you know what you're doing, so just keep doing it."

And right there, in the middle of the mall, my friend knew God was with her.  Emmanuel.

Shortly after that encounter, my friend became a grandmother.

Might you too be blessed by an awareness of God's presence in this holy season.  And might you make that presence known in your own acts of love and kindness.

I subscribe to two newspapers, the New York Times and the local daily paper out of Fort Myers, The News-Press.  The Times gives me a broad picture of the nation and the world, the News-Press helps keep me current on matters of concern here in Southwest Florida.

One of the features in the News-Press is a chronological listing of events and classes being held by area faith communities.  As I read through this past Sunday's listings for the week ahead, it contained an array of items, mostly focused around Advent, Chanukah and Christmas:  a 25th annual Christmas carol sing (twenty-five years is old in Florida!), a Chanukah celebration (no specifics, but menorahs and latkes will most likely be included!) and an event called Celebrate the Advent Season (most likely without latkes!)  Imagine my surprise, however, when wedged between a Christmas cookie decorating event and a Holiday Bazaar, I found this listing:  "Florida Gun Shows Fort Myers until Dec. 13, Lee Civic Center, etc.)"  (The News-Press, 12-6-15, 28A)  Florida Gun Shows?  In the Faith Calendar?  I realize, one could argue cookie decorating has little to do with matters of faith as well, but Florida Gun Shows?  I can only hope that some editor was asleep at the switch when that entry was included.

The more I thought about it, though, the more I realized that it may have been incredibly appropriate.  For there are many, many Americans (and others) who place their faith in guns.  Why else would they hold on to them so tightly?  What's that t-shirt that shows up on Facebook every once in a while?  "They'll take my gun out of my cold, dead hand"?  If that's not religious fervor I don't know what counts as such!  Perhaps those who claim religion is the cause of all--or most--wars and violence are right.  They've just forgotten to list faith in guns among the various religious expressions around the world.

That's why, as much as I agree with the front page editorial that showed up in the New York Times this weekend as well, I don't think it's going to happen.  Here in part is what they said:  "Certain kinds of weapons . . . and ammunition . . .must be outlawed for civilian ownership . . . . [A]nd yes, it would require Americans who own those kind of weapons to give them up for the good of their fellow citizens." (New York Times, 12-5-15, A-1)

That sounds to me like a practical application of the Golden Rule, subscribed to by people of many different faith traditions.  But I suspect it doesn't cut it if you put your faith in guns.
Posted by John H. Danner at 11:21 AM 1 comment: