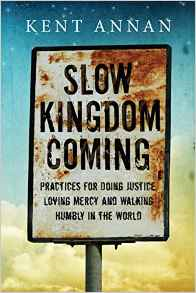 When I graduated from seminary I had to assemble a professional profile--if you will, and overgrown resume.  The profile had to include eight written references.  One of mine was written by the president of my seminary.  In it he kindly offered up some kind words about my potential as a pastor, but he also wrote this:  "John will need to learn, and I am certain he will learn, that patience also is a virtue.  He is very anxious--in some ways a laudable quality--to get everything done immediately.  Without losing that edge, he needs to learn that there are seasons for certain efforts, and seasons for waiting."   In so many ways, President Glick's assessment of my potential, sums up Kent Annan's insightful, helpful book.  Without losing the edge, those who seek after peace and justice, need to be patient, for the kingdom of God will come--but it will often seem to be taking a very long time!


Annan's book focuses on five practices Christians (and others) can engage in as they seek to cooperate with God's work:  Attention, Confession, Respect, Partnering and Truthing.  Each of these, Annan argues, can aid one as he or she attempts to engage in social .  "The same love that calls us to work for a more just world," writes Anna, "also calls our inner lives to be shaped by justice.  Who we are determines how we act . . . ."  (26)  Engaging in the practices, Anna contends, can help shape us from the inside out.


Annan uses many examples, some drawn from his own experiences, to illustrate his various points.  He does not shy away from negative examples (this is what not to do) but more often he focuses on positive examples, success stories if you will.  Always, though, casting them in the light of the "slow kingdom coming."


I am recommending it to the mission committee at my own church.  It is that good.


Disclosure of Material Connection:  I received this book free from the author and/or publisher through the Speakeasy blogging book review network.  I was not required to write a positive review.  The opinions I have expressed are my own.  I am disclosing this in accordance with the Federal Trade Commission's 16 CFR, Part 255.

I'm participating this week in a webinair on white privilege.  The webinair is an orientation to a new curriculum being introduced by the United Church of Christ, our denomination.  It is designed to help folks explore what it means to be white in America.  The course will be focusing on issues like education, incarceration and economics, and how being white in America confers certain often unrealized privileges. 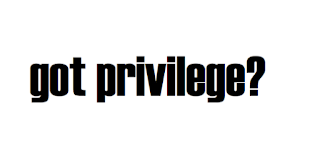 I'm taking the webinair to learn more not only about the issue, but also about the curriculum.  I am hoping to use it here at the church in the coming year.  While I know folks in my congregation will be open to discussing the issues, I wonder how they will respond to the basic premise?  Like most UCC congregations, we are overwhelmingly white (as is Sanibel in general.)  Our county, Lee County, is not--there are large numbers of African-Americans, Hispanics, and others.  But for the most part, aside from their presence during the day as part of the minimum wage work force, they are not on the island.

During the webinair's first session today there were two or three instant polls of participants asking a variety of questions.  One of them had to do with how I had experienced white privilege.  Had it given me any advantages in things like employment, housing or education?  Had it bettered my chances of receiving a loan?  I suspect the answer to all of these is yes, but I could not truthfully say I had been aware of any advantage in most of the areas listed.  And that, I imagine, is the problem.  Those of us who are privileged, don't even realize it most of the time.  It is so "baked in" to our culture, that we think the way we are able to live is the norm for all.

I imagine I will learn much over these next few days as I think about the issue.  I am glad that the last session is something of a "where to from here" session..  How can I,
as a white person, be a part of bringing about change. I suspect that's the biggest issue of all.  Clearly, awareness is the first step--but what next?
Posted by John H. Danner at 4:12 PM No comments:

Heaven or Hell? Love or Hate? 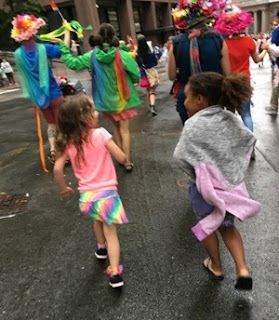 Saturday, June 11th at Noon, at Copley Square, thousands of folks gathered to join in Boston's annual Pride Parade.  Black and white folks, young and old, gay, bisexual, transgendered, lesbian and straight, people of many religious persuasions, and some of none--all sorts of folks, joining in a festive celebration.  Among them, my granddaughter pictured above on the right, chatting away with one of her friends.  She and one of her moms, my daughter Liz's partner Erica, had a grand time.  It was like heaven on earth.
Not much more than twelve hours later in Orlando, where two more of my granddaughters live, a man bent on terror and hate, blasted his way into a gay nightclub, filled with more folks celebrating life, dancing into the wee hours, and killed fifty, while injuring fifty-three more.  Blood and weeping soon spread into the night.  It was like hell on earth.
As a grandfather, it all scares me.  What if that hatred had spewed out over the parade in Boston?  What if . . . .

But then I stop, and realize I'm thinking exactly the way hatemongers and terrorists want me to think.  I am succumbing to fear.  And that can only get in the way.  For fear breeds all sorts of distorted thinking, distorted responses.

I can't help but wonder, for instance, what sort of fears prompted Pastor Stephen Anderson in Tempe, Arizona, to record a video message saying in reference to the Orlando shooting, "The good news is that there's 50 less pedophiles in this world, because you l know, these homosexuals are a bunch of disgusting perverts and pedophiles.  That's who was a victim here, a bunch of, just disgusting homosexuals at a gay bar, okay?"  (www.patheos.com)  Well, no, Pastor Anderson, it is not okay.  It is no more okay than the shootings in Sandy Hook or Blacksburg.  It is no more okay than the shootings in Charleston or Aurora.  The folks killed in Orlando, were all sons and daughters, grandchildren, of those who now grieve.  And more than that, they were, and are, sons and daughters of God.  And God also weeps.

The first report I read after the incident, said officials were trying to determine if this was a hate crime.  I realize there is a technical definition of a hate crime.  But make no mistake.  This was, in every sense of the word, a hate crime. But hate mustn't be allowed to prevail.  Fear must not be allowed to grip our hearts.  There are many things we must say and do in response I am sure. I am not sure what all the answers are to assuring the safety of my children, and yours as well, but of this I am sure:  whatever we do, must grow out of love, for hatred only breeds more hatred.  Love alone can change us.  Love alone can save.  But love takes work.  Hard work, complicated work.

I say all this as a grandfather who wants only the best for his family and yours as well.  I say it as a Christian pastor.  I say this knowing we can choose--heaven or hell.  Love or hate. 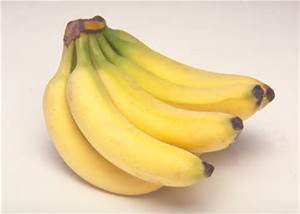 Someone once gave me a book titled 1,411 Quite Interesting Facts to Knock You Sideways by John Llyod, John Hutchinson and James Harkin.  Now mind you, the interesting facts are often quite obscure, and while there is an index to the book, there are no source attributions.  So I guess we just need to take Mr. Lloyd and friends at their word.

A full six of the 1,411 facts have to do with bananas.  Did you know, for instance, that there are 1000 species of banana, but we only eat one?  Or that bananas are considered unlucky on fishing boats?  (No more peanut butter and banana sandwiches in the coolers guys!)  Or that bananas are used in making kimonos?  (Huh?)  My favorite banana fact, however, is this one:  "The world's largest container ships can carry 746 million bananas."  (67)

Imagine that!  Bananas stretched as far as the eye can see, and then some.  End on end, enough bananas to, I don't know, reach the sun?  The moon?  Midtown Manhattan?  Think of all the banana pudding you could make.  Or banana splits (Personally, I never liked the pineapple sauce though--make it mostly chocolate syrup.)  Or banana bread.  Now that would be pretty gross.  I mean, you have to let bananas go half-rotten before you can use them in banana bread.  Imagine the fruit flies that would attract!

I suppose this is something of a waste of time--ruminating on bananas like this.  But sometimes, you need distractions from a world that offers up things like this year's presidential campaign. I mean, it is, quite literally, enough  to drive you . . .  well, bananas.  746 million of them at least!