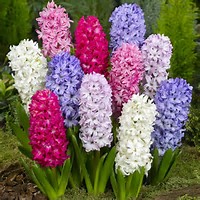 OK--everybody who has heard of Nowruz, put your hand up.  Anybody?  I realize, unless you are Iranian, or a Zoroastrian, or a reader (like me) of the Sunday New York Times, you probably didn't raise your hand.  But I must say, I was very taken with an article describing this Iranian holiday a week ago Sunday.  It's official flower is hyacinth, and some of its delicacies include chickpea cookies and sprouted lentils

It's a springtime celebration--a recognition of the hope that is in the air this time of year.  Apparently, while rooted in Zoroastrianism, it is not a specifically religious holiday.  I got a kick out of the way Firoozeh Dumas, the author of the Times article, put it:  "Here is a holiday that asks only one thing of you--to have hope. . . . There is no controversy associated with Nowruz.  No indigenous people were displaced, no wars were fought, no one died.  Unless winter comes up with some sordid revelation about spring, we are in the clear."  ("Your New Iranian Holiday,"  New York Times, 3-19-17, Review-2)

To have hope.  That's not a very tall order, or at least not most days.  Granted, in light of the mess in Washington right now, and the poor relations Iran itself has with some of its neighbors, and the threat posed by North Korea, and the fact that some folks still deny climate change, one could say hope's in short supply.  But of course, the minute we say that it becomes a self-fulfilling prophecy.

The debate in this country about healthcare insurance has been going on for decades.  And recently it has come to my attention that for many people it boils down to a simple binary.  Healthcare is seen by some as a responsibility, and by others as a right.

On one side, it is said that each and every person should take primary responsibility for his or her own healthcare and the necessary financial provisions that make that possible.  Most folks on that side of the debate are willing to exempt children, although they would, most likely, argue that each child's parents are responsible for the care of their own child.

On the other side there are those who say, healthcare should be the right of every citizen.  Each and every citizen in this country should be able to expect high quality healthcare, provided for by the government.  Many on this side of the argument would even extend that right to those who are not citizens of our nation, but merely residents.

Like most binaries, I think such black and white thinking tends to polarize rather than clarify.  The answer to our nation's healthcare dilemma must lie somewhere between the two.  Or maybe, even better, in a combination of the two.  Does seeing something as a right automatically rule out personal responsibility?  Of course not!  I have the right to vote, but I also have the responsibility to exercise that right.  I have the right to speak freely about any subject I wish, but I also have the responsibility to use that right in ways that advance the common good.


Rights and responsibility are not mutually exclusive!  So how can we craft a system that makes quality healthcare accessible to all, and yet which encourages, fosters, personal responsibility?  The answer to that question, I suspect, is the answer to our dilemma.
Posted by John H. Danner at 10:49 AM 2 comments:

A Poem a Day 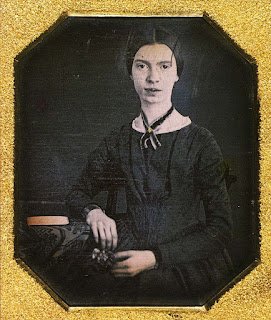 I've taken up a new discipline to go along with my Bible reading, and prayer and meditation.  I am reading a poem a day.  Right at the moment I am working my way through
a volume of poems by Billy Collins, former poet laureate of the United States.


It all happened because one day in doing some research for a sermon I came across an exquisite poem, which really prompted me to stop and think about its meaning--and ultimately about meaning in general.  I realized, as much as a love poetry (I have quite a few volumes of it), as much as I enjoy writing poetry (I've even had a poem or two published), I just don't read enough of it.  So I vowed to begin.  I'd always wanted to read some more Collins--so I went out and purchased one of his books, and began to read through it.  A poem a day.


I suspect we would all do well to read a poem a day.  I know, some people just don't like poetry.  And others feel they never "get it".  But I'm not sure most poets want you to "get it".  I suspect most poets want you to simply experience their poems.  Live into them, so to speak.   After all, good poems invite the reader to engage with the words, the ideas, even the implied silences.  Good poems invite you to pause . . . to think . . . to feel . . . to be.


Here's the wonderful irony of it all for me at the moment.  I am co-teaching a course which includes a look at Emily Dickinson.  And I just discovered Collins has a poem called "Taking Off Emily Dickinson's Clothes."  It is something of an inside joke--while at the same time, offering some wonderful images.  And when Collins writes, "What I can tell you is/it was terribly quiet in Amherst/that Sabbath afternoon . . ." you can hear a pin drop!  A hair pin that is.
Posted by John H. Danner at 11:21 AM 1 comment:

Grandmothers to the Rescue: A Gustatory Proposal

Enoteca Maria.  In Italian it literally means "Maria's wine repository".  But enoteca can also mean "restaurant" or "bistro."  In particular, Enoteca Maria is a restaurant on Staten Island owned by Joe Scaravella, and named for his mother.  I've never been there, but I read about it in this past Sunday's New York Times, and I am intrigued!

As the name implies, it is an Italian restaurant.  Well--sort of.  Half the menu (the permanent half of the menu) is indeed made up of classic Italian dishes.  All overseen by Adelina Orazzo, a sixty-one year old transplanted Neapolitan.

But the other half of the menu changes every day, as a rotating group of grandmothers from a variety of ethnic backgrounds, fashion their own menus and prepare the dishes that they feature.  They come from Sri Lanka, and Japan, and Russia and Poland.  Some speak English, others are very limited.  But all of them take great joy and pleasure in preparing the foods that have comforted generations of folks in their homelands.  So one night you might have a choice of lasagna or gyoza and shrimp dumpling soup.  Another night, it might be ravioli or curried lamb.

I'm intrigued, not just from an epicurean perspective, but also because of the fact that Scaravella says the grandmothers are learning from one another.  "They can't be jealous," he says, because they're from two different world . . . The only thing they can say is 'Oh, how did you do that?' . . .  There's an exchange of culture and stories ands recipes."  (New York Times, 3-5-17)

So here's my idea.  Instead of leaving international diplomacy to the professional politicians and diplomats, why not convene a conference of grandmothers?  Why not put them all in a huge industrial kitchen and set them to work cooking up a plan for peace.  Maybe we can learn something from them.  And worse case scenario, a la Babette's feast, we'll have one heck of a fine meal!
Posted by John H. Danner at 2:56 PM No comments: