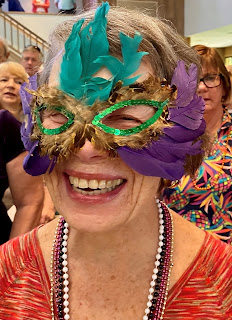 Yesterday we celebrated Mardi Gras in our worship services here at Sanibel Congregational United Church of Christ.  There were masks, and beads, and great music by our special guest musicians from Island Jazz, as well as our own resident musicians and choir.  Jokes were also interspersed throughout the service.  It was a grand celebration!

Mardi Gras, as most folks know, means "Fat Tuesday," and it refers to the fact that prior to lent and its time of fasting, all the fat in a home is to be cleared out.  Most folks in our tradition don't follow that particular rubric.  Some may give something up for Lent:  chocolate, television, desserts.  But the strong contrast between a time of feasting and a time of fasting is largely lost on us mainline Protestants.

Ash Wednesday we will make ashes available for those who wish to receive them as part of our Ash Wednesday service.  Wearing sackcloth (sort of biblical burlap I guess) and ashes was a traditional way of showing repentance.  But marking ones forehead or hand with ashes can also serve as a reminder of mortality.  Dust to dust, ashes to ashes, and all that.  Lots of Protestants resist the idea of ashes (indeed the whole notion of Ash Wednesday) but as someone who presides over many committal services where we scatter the ashes of folks I have known and loved, it proves to be a powerful symbol for me personally.

This Lent I am planning on taking some extra time each week for silence, for prayer, for mediation and devotional reading.  Time above and beyond my usual morning practices.  Not because I am holier than thou--or anyone else.  Rather because I need to be more alert to the presence of the Holy in my life and in our world.  I won't be fasting, but I will be remembering my own mortality.  Not in a morbid way, but rather in a way that honors the fact that I am a human being.  That is worth celebrating and contemplating.  That is worth bright beads and somber ashes. 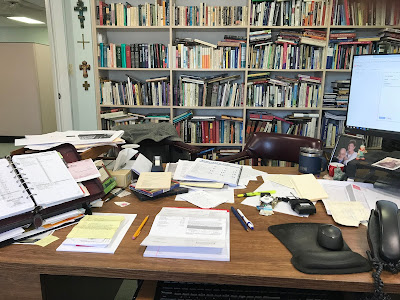 You can tell it is high season here on Sanibel.  Traffic is a bear!  There is only one way off the island (by truck, car or bike, that is) and so the main road is often bumper-to-bumper.  From about 3:15 PM to 6:15 PM, it is stop and go, and the two miles from my office to the exit point on the island can take almost an hour!

There is another sign of high season for me as well.  My desk--indeed my office--is a disaster area!  Piles of books and papers and CDs and other things, are just thrown on the floor or on top of my desk when I am done with a meeting or teaching a class or leading worship until I have time to excavate.  Which often doesn't happen for days at a time!

Frankly, I have a serious love-hate relationship with high season.  I love the fact that most all of my p[parishioners are here.  I love the full sanctuary on Sunday, and the fact that my classes are well attended.  I love the energy that oozes from every corner.  But I do hate the traffic, and find it annoying to have to plan around it!

But such is the life of anyone who lives or works in a seasonal location.  When we are busy, we are very, very busy, and when we are not . . . well, you know how that goes.

All that said, however, I wouldn't want to be anyplace else!  I am grateful that as I round out my fortieth year of ordained minsitry, and my forty-third year of working in a parish, I find I really have little to complain about!  Life is good, here on Sanibel.  And while it is not paradise (contrary to all the signs in gift shops here on the island) it is a very special place to be a pastor.  Thanks be to God!

Are You OK with Guns in Church? 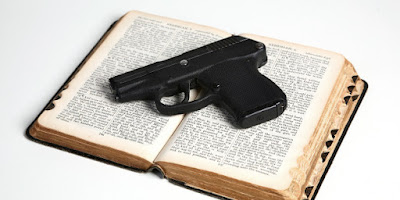 I must admit I was rather startled by the headline I saw in last Sunday's edition of the News-Press, our local newspaper.  "Pastors mostly OK with guns in churches," it read.  Excuse me?  Reading through the article I did not see any statistical information to back that up, just some anecdotal materials from two local churches.

Now I realize reporters don't generally write their own headlines.  And it isn't unusual to find a headline doesn't fully reflect a story's content.  But this was pretty blatant!  I went on line to see if there was any poll or survey information to back up this claim, and came up empty handed.  I could have easily overlooked something, so I am not making any scientific claim here.  But still, if such information was readily available I suspect it would have shown up in my search!

I don't know about other pastors (or other clergy in general) but frankly, I am not OK with guns in church.  We do pay a fair amount of money for a police officer to be posted at the entrance to our property on Sunday mornings, and he (or she) is armed.  That in and of itself makes me uncomfortable, but security experts have told us that is the best thing we can do to ensure the safety of our congregants.

But concealed weapons?  In the worship service?  No thank you.  I know the recent mass shooting in a Texas church was a most likely shortened by the presence of persons with concealed weapons.  But that could have gone down a whole different way--more innocents caught in the cross fire, for example.  Maybe I am being naïve, or idealistic.  Maybe I'm just a coward, after all, I'm upfront in worship--a prime target I suppose.  But I am not OK with guns in churches--headline notwithstanding--and I just needed to say that clearly.
Posted by John H. Danner at 2:40 PM 1 comment:

Why We Need Black History Month

Every once in a while I will hear some ask, Why do we need Black History Month?  Isn't the history of black people part of American history?  Why single them out?"

It is helpful to know that Black History Month is not a new phenomenon.  In fact it dates back in an earlier form to 1926.  That is when the first Negro History Week was established.  It grew out of the work of an historian  named Carter Woodson, and a Christian minister, Jesse Mooreland, who had founded the Association for the Study of Negro Life and History in 1915, right in the midst of the Jim Crow Era, when people of color were being more and more marginalized in American life.

That first week was set up in the second week of February, to coincide with the birthdays of Abraham Lincoln, February 12, and Frederick Douglass, February 14.  Over time it was taken up by more and more cities, as various mayors and other officials issued proclamations in support of the effort.  In the sixties it morphed into Black History Month and it was officially declared by Gerald Ford in 1976.  In his proclamation he noted the importance of such a month "to honor the often neglected accomplishments of black Americans . . . throughout our history."

Why, these many years later, do we still need Black History Month?  Because there is still so much of the story to be told.  Because America's story is incomplete without it.  Because America would not be the great nation that it is today without the contributions of so, so many black individuals.  Indeed, in so many instances, America was literally built by persons who were enslaved, as well as those who were technically free, but often held down by black codes and discriminatory laws.

Why do we need Black History Month?  To help mend the rifts ad divisions, to help us see the whole picture.