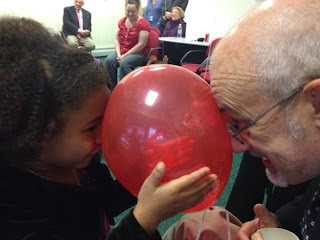 Last Thursday Linda and I flew up to Albany, New York, and then drove from there to Pittsfield, MA to help celebrate the newest additions to our family.  You see, Friday was National Adoption Day, and to mark the occasion the Berkshire County Department of Children and Families had scheduled thirteen adoptions for that day.  Including our two new granddaughters!  There were speeches and a choir singing Christmas songs and a buffet breakfast complete with a special cake and face painting and lots and lots of balloons and flowers!

The actual adoption ceremonies were held in the Juvenile Court.  Unlike normal days, I'm sure, it too was decked out in balloons and flowers.  The judge gently questioned the children and their prospective parents and then, with a big smile on her face, declared the adoptions final and irrevocable.  For our daughter Elizabeth and her partner Erica it was the culmination of a very long process that had involved much in the way of time, soul-searching and paper work.  And so begins a new adventure--they are now officially mothers.  It never would have happened in some states.  Despite the fact that they will provide a loving and nurturing home, they would have been ruled unacceptable simply because of their sexual orientation.  But Massachusetts wisely realizes that love makes a family.

All of which has given me a new image for the kingdom of God.  I can just see Jesus sharing one of his parables . . . .  The kingdom of God, he might say, is like two women who have made a home for themselves, and desiring to share their love they seek to adopt two little girls.  And when they arrive at court it is decked out with balloons and flowers.  And the judge greets them warmly and celebrates their willingness to become parents for two girls who need kindness and consistency.  And she even lets the little one bang the gavel and the mothers and daughters and even their grandparents all stand behind the bench and cry and laugh and sing. 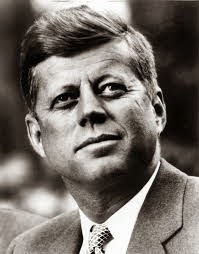 Where were you when JFK was shot?  It is a question many folks are asking as we approach the 50th anniversary of his assassination.  And most Americans over the age of fifty-five or so can answer it.  I was at school.  I can picture the clock on the classroom wall (I must have been counting the minutes until class was over).  When the principal's voice came over the PA system announcing the sad news we all gasped.   We were sent home a little early.  My parents never let us watch very much television, but that week we were practically glued to the set much of the time.

My folks were staunch Republicans, and had been Nixon supporters in the election that brought Kennedy into office.  I think they had some real reservations about his ability to govern.  I don't know if they ever changed their mind about that.  But that didn't stop my Dad, also a pastor, from conducting a special prayer service at our church during the official mourning period.  We prayed for the Kennedy family, and we prayed for the nation in those uncertain times.

The service itself was held in the church basement--all our services were held there at the time because the sanctuary was undergoing renovations.  I remember how odd it felt getting on my Sunday clothes in the middle of the week (I was ten at the time) and going to church on what would have been a school day.  Life seemed off-kilter--and in many ways it was.

Some commentators over the last week or so have said that the assassination of Kennedy marked the end of an era of innocence for our nation.  And certainly the decades that followed have been full of major challenges, including wars that have been, for the most part, rather unpopular.  But I question whether or not we were truly innocent before that fateful time in 1963.  I was.  I was just a kid after all.  But as a nation?  In the 20th century alone we had experienced two brutal wars, the dropping of the A-bomb, the McCarthy era . . . and the list goes on.  I wonder if we as a nation were ever innocent.

Historians are still weighing the importance and effectiveness of Kennedy's short tenure as President.  But whatever the final outcome of history's assessment, one thing he left behind was his stirring reminder that for a democracy to function fully and well, all of it's citizens must be willing to participate.  "Ask not," he famously said, "what your country can do for you--ask what you can do for your country."  It is good to remember the convertible and the pink suit and the brave secret service agents.  It is better yet to remember the need to serve others. 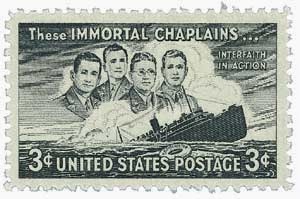 A true story for Veteran's Day.

On February 2, 1943, an Army transport ship called the Dorchester was steaming through the frigid waters of the north Atlantic, going from Newfoundland to Greenland, when a German U-boat fired a torpedo that hit dead-on.  The Dorchester's captain, Hans Danielson, had prepared those on board for the possibility of a strike, and they had been ordered to sleep fully clothed, with life-vests on.  But some had disobeyed orders because the lifejackets were uncomfortable.

Many men were killed by the torpedo blast, but hundreds were not.  Some were not.  Some were rescued by escort ships. But panic began to set in.  Lifeboats were overcrowded--and some sank.  Rubber rafts thrown into the ocean drifted away before they could be used.  Midst all the confusion and fear four men brought a measure of calm to the scene.  Four chaplains.  Two Protestant ministers, a Roman catholic priest and a rabbi.  George Fox, Clark Poling, John Washington and Alexander Goode.

Gently, yet firmly, the four chaplains worked their way around the deck.  They prayed for the dying; they offered words of assurance and hope to the frightened men trying to get off the sinking vessel.  One private who'd jumped overboard and was treading water midst floating dead bodies and oil slicks, later said, "I could hear men crying, pleading, praying.  I could also hear the chaplains preaching courage.  Their voices were the only thing that kept me going."

The chaplains didn't just preach it--they lived it.  One man, a petty officer named Mahoney, had forgotten his gloves when he left his cabin.  Trying but failing to get back to his berth, he met up with Rabbi Goode.  He told him where he was going, what he needed.  Quietly the rabbi told him that he had two pair--and handed gloves to Mahoney.  It was only later that Mahoney realized Goode had in fact given him his one and only pair of gloves.

The chaplains then opened a storage locker and began to hand out life vests to the men who had forgotten their or who had lost them in the melee.  And then, when the vests were all gone, the chaplains stripped off their own and gave them to four men who had none.

And then they gave up even more--for room on the lifeboats was limited.  Together, arms linked in solidarity, the four chaplains stood on the deck of the Dorchester as twenty minutes after it had been attacked, it slipped under the ice cold waves.  To the very end they continued to pray aloud for the safety and the well-being of the men they were charged with shepherding in their darkest hour.  All four died at sea.  (Quote from "The Saga of the Four Chaplains," www.fourchaplains.org)

On this day when we honor so many brave men and women, let us remember that such courage is not just for battles and warfare--courage is a gift for everyday life as well.  The chaplains focused on God and the needs of those around them, and in doing so found the courage to do the right thing.  Might we be so focused ourselves.
Posted by John H. Danner at 3:04 PM No comments: 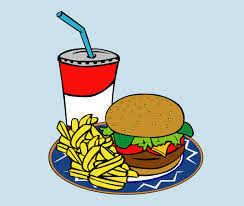 Yesterday I missed supper.  My wife Linda and I were out visiting family, and the supper hour came and went without my eating.  Later in the evening, as we were driving home, I said, "I am really hungry!"  She offered to stop and get something at a burger joint, but in the end we waited and I had a bowl of cereal and milk before going to bed.

How often do we use such language without really thinking about it?  Yes, I wanted something to eat--but hungry?  Really hungry?  I don't know if I've ever been really hungry.  Certainly, I've never dealt with the uncertainty of not knowing where I was going to get my next meal.  And starved?  It's almost criminal the way we throw that word around.  "Boy, am I starved!"

This past week millions of Americans learned anew what it means to be hungry as automatic cuts in the Food Stamp program went into effect.  The cuts mean that a family of four could lose up to $36 a month in their allotment.  That could mean a meal, or two or maybe a whole day's worth of meals.  According to Bread for the World, an anti-hunger advocacy group, 49 million Americans live day in  and day out at the risk of hunger--at the risk of literally being unsure of their next meal.  And that's just here in America.  We're not even talking about the billion or so folks around the world who suffer from hunger.

So what can you do?  Well, to begin with go the Bread for the World website at www.bread.org and read up on the issue for yourself.  Then, take some time to write a letter or two to your legislators.  Let them know hunger is a priority issue!  And then pry loose some of your own money and donate to a good hunger relief agency.  And those canned goods for the food pantry--or volunteering your time at a soup kitchen--those things are all good as well.

Yesterday I missed my supper.  For a few hours.  Some folks miss it altogether--along with breakfast and lunch.  We can do something to change that!
Posted by John H. Danner at 3:43 PM No comments: