OK--so Linda and I go on vacation and head north. Places like Michigan, New York and Massachusetts. We figure we'll escape some of Florida's summer heat and humidity for a little while, and we won't be looking over our shoulders for hurricanes.
Well, it has been cooler! But as for the hurricanes . . . .
When I first heard reports about a tropical storm named Irene heading for our shores, I began to worry about the folks back home in Fort Myers and Sanibel. Little did I imagine we'd get caught in the middle of it! But so it was. As we hunkered down at our daughter's home outside of Boston, we watched and waited as the winds and rains grew in intensity. It wasn't quite a hurricane when it reached us, but it still knocked down some nearby tree limbs, and flooded the floor of the passenger side of our car. The city transportation system was closed down for the day. Many churches canceled their services. And we ended up altering our plans to go to Martha's Vineyard.
All that said, though, it wasn't much more (for us) than a major inconvenience.
But others were not so fortunate. According to the Boston Globe, 650,000 customers in Massachusetts lost power. And many, many more along the East Coast. Experts estimate that the storm caused over 7 billion dollars in damage. And worst of all 21 folks lost their lives.
On this sixth anniversary of Hurricane Katrina, things seem to pale in comparison. Yet, if you lost power, if you lost property, if your loved one lost his or her life, comparisons don't really matter, do they? And to those who complain we "over prepared" I say, thank God you are still able to complain!
Posted by John H. Danner at 5:30 PM No comments:

My wife Linda and I are on a road trip, and part of the drive took us right through the heart of Dixie: northern Florida, Georgia, Tennessee, Kentucky . . . and all along the way there were billboards. Lots and lots of billboards. Despite television and the Internet, there are many folks, apparently, who still want to get their message across the old-fashioned way!
There are, of course, all sorts of billboards advertising services for travelers: fast-food joints, motels, and so on. My favorite motel billboard along the way promoted a "midnight rate" available after 9:00 PM. Why not call it the nine o'clock rate?
I was surprised, considering the part of the country through which we were traveling, at the number of billboards advertising so-called adult bookstores, video stores and so on. There were several signs for Cafe Risque, a few for the Lion's Den Adult Superstore, and one for a club with strippers "as featured on the Jerry Springer show!" Now there's an endorsement I'd want to avoid! And would someone please explain to me why anyone would promote a liquor store with a drive-thru?
I saw lots of billboards for medical services. There was one offering hair transplants for "$2 a graft" (it would cost me a small fortune!) Then there was the Georgia Dental Center that had a sale going on with "half-price implants." (I just don't think I'd ever buy discounted teeth!) And in an example of extremely poor taste (I'm not making this up) there was a billboard for the Amputee Prosthetic Clinic with a over sized picture of Captain Hook!
Religion is also present on these roadside signs. I spotted many anti-abortion billboards. But there was an occasional liberal message. One I especially liked suggested using Desmond Tutu as a model for living. There was a sign that simply said, "The Way, the Truth, the Life . . . Jesus Christ." And then one designed to provoke the viewer. "HELL" it said in large letters. Then, in a smaller font: " I haven't thought about that lately . . . ."
I'm not sure what all these billboards say about the south, or America for that matter. But while they make for some interesting reading, the best billboards ended up being the ones that weren't there. For America, despite being spoiled in spots by too much signage, is indeed, a beautiful country!
Posted by John H. Danner at 4:56 PM No comments:

Deep in the Soul of Texas

I am deeply troubled by last Saturday's prayer rally called The Response held at Reliant Stadium in Houston. Not because of the rally itself. Not that it reflected my own theology. It didn't. But that's not a real problem. After all, as they say, this is America and, thank God, we are free to believe as we choose. So while I cannot subscribe to the idea that a significant part of the population is consigned to damnation--one of the tenets in the statement of faith posted by The Response on their website--I defend the right of others to hold such beliefs.

No, what bothered me about the rally was the fact that it was initiated and basically hosted by a sitting governor, Rick Perry of Texas. Don't misunderstand. I have no issue with the fact that the Governor is a man of faith. I have no issue with his letting his religious views be known by others. And I would assume as he makes various decisions he will consider things in light of his own beliefs, religious or otherwise. But using his bully pulpit as a literal pulpit crosses the line.

I looked over the website for The Response. There is no question, it was a Christian event--and a very narrowly defined version of Christian at that. The home page of the website even has a virtual altar call. "The call to repentance and a lifestyle of worship," it reads, "does not end with an event, but rather begins with that moment when we say 'yes' to Jesus." (http://www.theresponseusa.com/) Viewers of the site are then invited to click further if they want to make a commitment. In the opposite column on the homepage, one finds the prayer that Governor Perry offered at the rally.

Listen, I'm a Christian. I love Jesus. Really! I pray every day. My staff and I pray every weekday morning for our nation. And I would suggest all Christians are called to do the same! Including the Governor of Texas! But Rick Perry isn't just the governor of Texans who consider themselves to be Christians--no more than I'm just the pastor of those parishioners who hold my political views. Its bigger than that for both of us. I'm the pastor of Republicans and Democrats and Independents and folks who've give up on the system all together. And Rick Perry is the Governor of Roman Catholics and Muslims and Buddhists and whether he likes it or not atheists as well. As such, he needs to bend over backwards to make room for all people in his vision of Texas--and of America. Frankly, I don't think that happened on Saturday. And that's what bothered me about the rally. 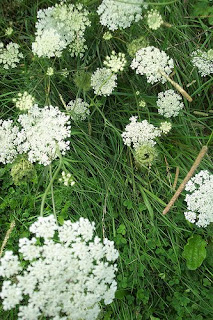 When I think of August, one of the images that comes to mind is that of Queen Anne's Lace. Daucus carota. Wild carrot. As a boy, our family vacations always happened in August, and the fields and roadways of Vermont where we spent the month were covered with the feathery white weed. I didn't suffer from allergies back then, so they were a pure joy. My brother and I would pick handfuls of them and present them to my Mother, who always received them with the same acclaim she welcomed roses delivered by the florist for her birthday.

I looked up Queen Anne's Lace on the internet (don't you just love Wikipedia?) and discovered it is considered a beneficial weed. Apparently, at least in some settings, it provides an alternative target for predatory wasps, thus protecting the other plants. It can also create shade and a bit of cooling for other crops.

I really like that idea--a beneficial weed. Usually we think of weeds as useless at best, a a menace at worst. Weeds are for pulling out. Weeds are for throwing in the compost heap, or the backyard burning barrel. But who's to say what's a weed and what's not? As a boy, I thought Queen Anne's Lace was one of the most beautiful flowers on God's planet--or at least in Vermont. Truth be told, I still do!

We are often quick to label people as weeds as well. We relegate them to the scrap heaps of life without giving them a second thought or a second look. The physically disabled, the mentally challenged, those of differing sexual orientations, people of other races, other religions, other nationalities. But when we do so, our lives are made poorer for it. And we miss out on gifts, benefits such souls they have to offer to offer society.

I'm traveling up north later this month--I'll even have a day or two in Vermont. I'll be watching for the Queen Anne's Lace. But you needn't go to New England to find beneficial weeds!