What Do You Call a Grandfather? 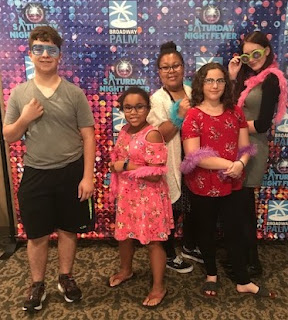 My grandchildren have been visiting over the last week or so.  And for me it always gets a bit confusing.  Let me explain.

I'm always interested in what people call their grandparents.  There are so many different names and nicknames.  I guess that interest stems in part by the fact that my six grandchildren call me by two different names.  My oldest grandson, a recent high school graduate, couldn't pronounce Grandpa when he was little, and so he called me Pepa.  It stuck--and now both he and my younger grandson call me by that name.  When my first granddaughter started talking, though, she decided she didn't like calling me Pepa.  She wanted to call me Pop Pop.  And so that stuck as well.  And that's what she and her sister call me.  And while it was confusing at times, it seemed to work.  Grandsons called me Pepa, and granddaughters Pop Pop.

But our youngest child, my daughter Elizabeth, and her partner Erica, decided to move towards adopting two little girls of their own, and so when they came on the scene, I suggested that we stick with the gender-related names.  And it worked.  They call me Pop Pop.  And all was well--that is until one of the granddaughters decided to call me Pepa.  She's heard her boy cousins call me that, and decided it must be, as she put it, "your real name."

And then one day, my wife Linda had two of the grandsons and two of the granddaughters in the car, and she was talking about me--and she got all confused.  "You'll have to talk to Pop Pop about that," when she was asked to grant permission for something.  "Or Pepa--or whatever," she said.  At which point the oldest grandson, who was twelve at the time, the one who had started the whole thing a decade earlier, said, "I think I'll just start calling him Grandpa."

(Photo:  Five of the six grandkids at a recent outing theater outing, hamming it up!  The oldest grandson had to work!)

Snoopy and the In-Betweens or, What About Justice?

I clipped out a Peanuts comic strip some time ago that seems to capture some of the current discontent in this country and around the world.  Linus and Snoopy are standing outside and it's raining.  A real downpour.  Linus, ever the philosopher/theologian says, turns to his canine friend and says, "So you're getting a little wet . . . don't look so depressed . . ."  Then as he
walks away he quotes a bit of scripture, "Remember, it rains on the just and the unjust."  In the final frame, Snoopy sits looking rather puzzled as the rain continues.  "But why," he thinks to himself, "Why us in-betweens."


I suspect most of us think of ourselves as "in-betweens"--and not simply about matters of justice.  I can't cite the source, but I remember reading once that most Americans think of themselves as being middle-class, even if they have house worth hundreds and hundreds of thousands, and six figure salaries.  In-betweens.

Perhaps, though, instead of getting hung up on labels, we would be wise, if we truly are in-betweens in terms of justice, to take a look at ourselves and not make excuses for the injustices we ignore or even inflict.  How easy to say, "Well, yes I do this unjust thing sometimes--but most of the time I'm very good, very moral, very just."  Maybe we would all be a bit better if we were more honest, and attempted to make right the things that are wrong.

Not that I am free of such rationalizing.  Sometimes I just sit in the rain and grumble as well.

Reinhold Niebuhr and the Serenity Prayer 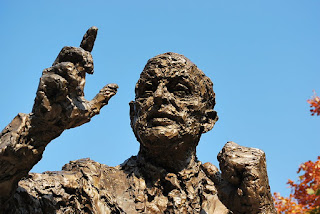 This past weekend my wife Linda and I traveled to Chicago so that I could officiate at a wedding there.  It was a good weekend--we did some tourist stuff, we had several meals with friends, and finished things up with a visit to Elmhurst following lunch in the city with parishioners who divide there time between Elmhurst and Sanibel.

I had visited Elmhurst College many years ago for a conference.  But it was fun walking around the campus.  It is a very well-regarded United Church of Christ related college.  Two of the most well-respected theologians of the twentieth-century, Reinhold and Richard Niebuhr were alumni of the college, and Richard later became the school's sixth president.

Near the gates into the college there is a statue of Reinhold, and inscribed on its base is the Serenity Prayer.  It is a beautifully, concise summary of a way of life for many as it has become central to those adhere to the 12 Step approach of Alcoholics Anonymous and other such fellowships.

The prayer, originally written in the mid twentieth century by Reinhold for a gathering of the federal Council of Churches, has been shortened to just three lines in most settings.  But the longer version, the original version, is well-worth reading (and praying):


God, give us grace to accept with serenity the things that cannot be changed,
Courage to change the things which should be changed,
and the Wisdom to distinguish the one from the other.

Living one day at a time,
Enjoying one moment at a time,
Accepting hardship as a pathway to peace,
Taking as Jesus did, the sinful world as it is,
Not as I would have it,
Trusting that You will make all things right,
If I surrender to your will
So that I may be reasonably happy in this life
And supremely happy with You forever in the next.
Amen.

Dealing with the Past (or What About Betsy Ross, Robert E Lee and All the Rest?) 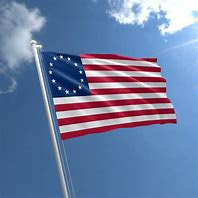 Most folks are aware of the recent dust up about Betsy Ross--or more specifically, the flag she helped craft during the Revolutionary War period.  In brief, an image of the flag was used by Nike as a bit of ornamentation on a new running shoe.  Objections were raised about it based on its connection to a time when slavery was an accepted part of our national culture and the fact that it has been sometimes used by hate groups.  No doubt part of the controversy was related to the fact that Colin Kaepernick, the former NFL player who took a knee during the playing of the National Anthem, was the primary objector.

All this follows on the heels (pardon the pun) of debates about statues of leaders of the Confederacy like Robert E. Lee and the appropriateness of the same for public display, names of streets and counties given in honor of folks who have been discredited in one way or another, and testy confrontations during presidential debates.

The reality (it seems to me) is that we have yet to find a way to deal with our past.  As a trained historian, I value our national story, with all its many flaws.  Our nation has held out hope and promise for millions over the centuries.  But we have also made grave mistakes as a nation, slavery and its aftermath chief among them.  As a  therapist I know that what happened in the past continues to shape the present.  Sometimes very much for the good, but sometimes, very much to the detriment of many.

In some ways battles over sneakers and statues are a dodge.  In some ways they are a distraction.  When we argue about such things we are just dealing with the surface, we are not really addressing the underlying issues.  For let's be honest, we have yet to fully deal with our past as a nation.

Acknowledging our mistakes, acknowledging the ways official and unofficial attitudes and actions have impacted people in years past, and the ways people continue to be impacted by the same, does not make a person unpatriotic.  Saying we must do all that we can to make amends for the past is not unamerican.  Rather it says, "I love this nation enough to take the risk of talking about its flaws honestly, openly.  I love this nation enough to work for a time when its ideals of liberty and justice for all will be fully realized."

It is hard, hard work.  And often times it means making real changes in how we live as a nation and as individuals.   I love America--and I don't want to leave it.  But I would like to see us love it enough to be willing to educate ourselves about the past, and then make the necessary course corrections to ensure a brighter future for all.  Yes, it will be more challenging than changing a pair of sneakers--but isn't America worth it?
Posted by John H. Danner at 11:39 AM No comments:

Some Definitional Questions for the Fourth

"We hold these truths to be self-evident, that all men are created equal, that they endowed by their Creator with certain unalienable Rights, and that among these are Life, Liberty and the pursuit of Happiness."  So begins the second paragraph of the Declaration of Independence.  Ironically, as most Americans know, the main author of this seminal document, Thomas Jefferson, was a slave-holder.  All men clearly did not include those black men held in chains at Monticello or elsewhere.  Nor, of course, was the word "men" being used in a generic way.  Men meant men, not women and men.  Certainly not children.  Just males.  White males.  And, in fact, in many minds, white male landowners.  So the self-evident truth being spoken of wasn't really about ALL human beings, nor even ALL men.  Just a select few.

Liberty?  What does it mean to be free?  Are we to be free from certain things, like fear and poverty?  Or free to do whatever we want?

I am grateful for Jefferson and the other founders.  I am grateful for the vision they set before us.  But I am also convince that how we understand that vison is evolving every day, and that we as responsible members of our society, have a responsibility to participate in that evolutionary process.