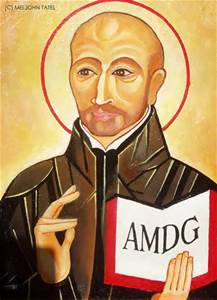 A parishioner recently lent me an anthology of sacred prose and poetry titled God Makes the Rivers to Flow.  It is a lovely collection of poems and prayers drawn from a wide array of religious and spiritual traditions.  One prayer that caught my eye was penned by St. Ignatius of Loyola, the Spanish founder of the Society of Jesus--better known as the Jesuits.

St. Ignatius is especially well-known for a series of devotions he developed based on the scriptures, designed to help one move along his or her spiritual journey, called the Spiritual Exercises, St. Ignatius' discipline is built on using one's imagination to enter into the Biblical story.

Here's a part of the prayer that caught my eye:

Oh, my God, I want to love you,
Not that I might gain heaven
Nor escape eternal hell
But, Lord, to love you just because
you are my God.
As I pondered that prayer I realized that's how it is with all of us.  We want to be loved not because of what we can do for the other, but rather, just because.  Just because we are who we are.  That, in the end, is the purest expression of love--is it not?  To love another, just because.
(The photo is an icon of St. Ignatius of Loyola)
Posted by John H. Danner at 10:11 AM No comments:

All six of my grandchildren have been with us over the 4th of July weekend.  All six!  They range in age from seven to fourteen and are all very unique human beings.  While I consider each and everyone of them my grandson or granddaughter, I realized at some point this weekend that not one of them is biologically tied to me.  None of them carry my DNA.  Which may be to their advantage!  But each of them came into my life in other ways.  Through stepchildren, through adoption . . . but not one in the traditional fashion.

I've been thinking about that a lot.  My wife Linda and I have a friend who refers to us as "the New Modern Family"--referencing the popular television show.  I suppose she calls us that because in our mix are folks of varying racial backgrounds, religious backgrounds and sexual orientations.  But she is, I suppose, right.  Our  family is representative of many, many families in the world.
Yet we still cling to the mom, dad, and two biological kids model as the ideal.

So is there an "ideal family'?  I don't think so.  I think family configurations are as varied as people--and each comes with its own strengths and weaknesses.  Each comes with its own blessings, and its own challenges.  And sometimes, those are the same--what appears to be a challenge, is a blessing in disguise.  And what looks for all the world like a blessing, proves to be the ultimate challenge!

Whatever the case, I am most grateful for my family.  And all six of my grandchildren.  We're having a good time together--and when they go home, Linda and I will take a very long nap.  A VERY long nap!