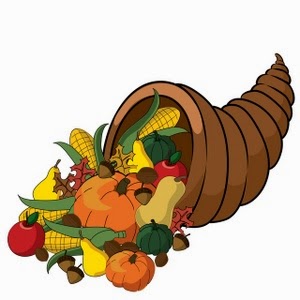 Thanksgiving.  For most Americans it conjures up images of abundance.  Tables overflowing with turkey and mashed potatoes and gravy and cranberry sauce and at least two kinds of pie.  No wonder our ancestors called it "the groaning board"!  Yet for many Americans Thanksgiving is just one more day of hunger.

A recently released study based on a federal survey says  49 million Americans are "food insecure."  In some 324 counties, one in five residents.  That means going hungry, eating less than is needed, or eating nutritionally inadequate meals due to financial constraints.  In other words, 49 million Americans are undernourished, malnourished, or simply hungry.  (USA Today, April 20, 2014, 5B)

We hear about hunger in America every year at this time.  And for a few brief days--sometimes weeks--we do fairly well at applying band aids to the problem.  We hold Thanksgiving dinners for the poor.  We take up food collections for soup kitchens and food pantries.  We pack up Thanksgiving baskets for needy families.  And that is all well and good.  Very good.  But let's not fool ourselves.  It doesn't solve the problem.  These are all wonderful acts of charity--but they are not really acts of justice.  Justice works to resolve the underlying inequities.  And while a basket of goodies or a hot meal in the church basement may fill a belly for a day, it doesn't begin to resolve the ongoing issue of hunger in America.

Let's be honest.  For those of us who think in theological terms, it is a societal sin.  I don't like to throw around such words needlessly, but the fact that there are children (and adults) who don't have enough to eat, or the right things to eat, or anything to eat at all, is unconscionable.  And the answer doesn't lie in opening more food pantries or soup kitchens.  The answer lies in working towards full employment.  The answer lies in addressing the minimum wage issue.  The answer lies in making it easier for supermarkets and other purveyors of good food to open stores in the inner cities.

This Thanksgiving, as you and I sit at our tables laden with good food, let us recommit ourselves to working towards the goal of food security for all Americans.
Posted by John H. Danner at 3:28 PM No comments: