A Pandemic Thanksgiving: Smiles, Handshakes and Other Small Things 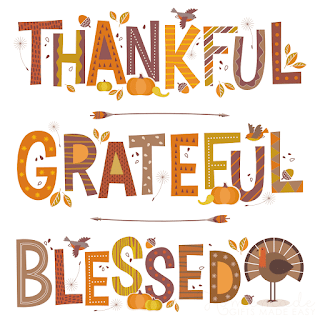 I recently came across a quote attributed to noted theologian and Holocaust survivor Elie Wiesel.  “I feel gratitude in my heart each time I can meet someone and look at his or her smile.”  I couldn't help but think, "How ironic!"  In this time of masking, seeing a smile is a rare treat!  In fact, to the contrary, I experience a bit of gratitude whenever I can't see a smile because someone is wearing a mask.

A smile is a little thing, isn't it?  Not being able to see one is a small price to pay for a measure of interpersonal safety.  But still, I miss smiles.  And I miss handshakes.  I really like a good, solid handshake.  My father taught all of us, my sister included, that a person is immediately judged by their willingness to offer a firm handshake.  Such a wonderful way to say, I see you, I respect you, I'm glad you are here.  But handshakes too, are not just rare these days, they are almost non-existent, at least in the circles I travel.  Yet they too are a small matter in the greater scheme of things.  Even in flu seasons past I have often found myself forgoing handshaking.

Maybe the pandemic has forced us to realize how important these little things can be.  Smiles, and handshakes, and hugs; how they convey so much.  But though they are often missing as we relate to each other, I am discovering there are other little ways of communicating that say I see you, I care.  The eyes, for instance, peeking above a mask.  They can smile too.  And a wave of the hand to a neighbor passing on the other side of the street.  That can show a measure of caring.  Hey there, neighbor, hope you are well.  Glad to see you, if only in passing.  Stay well!

As we approach Thanksgiving some of things we have always taken for granted will be missing.  But that does not mean there will be nothing for which we can offer up words of gratitude.  Indeed, maybe we will be able to spot some of the things we've missed in the past.

So in recognition of our national holiday devoted to gratitude, let me say thank you for reading this blog--and for turning to it whenever you do.  After all, what's the written word without readers?

The Miracle: A Review 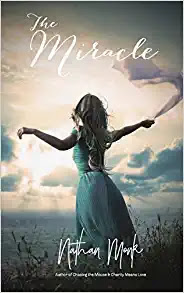 I do not serve a megachurch--we are fairly well-sized, for a mainline Protestant congregation, but we are far from being the kind of church that serves as the focal point for Nathan Monk's novel, The Miracle. Neither am I an evangelical, much less a charismatic Christian.  So the world drawn by Monk (there is a certain irony in his name) is one that is rather foreign to me.

I am, however, like the protagonist, Patrick Thackery, a preacher's kid.  And while I never felt any pressure to become a pastor myself, I do understand the inevitable internal comparisons.  And certainly some of the emotions experienced by Thackery ring very true.

That said, one of the chief difficulties with the book was the fact that much of it did not ring true.  Again, that may be due to my contextual naiveté.  But I suspect that is only part of it.  The book often feels in need of a bit of subtlety.  There are, for instance, points in the story where Thackery is reflecting on his evolving spirituality that are rather flat-footed.

I did read the whole book, and didn't have to force myself to finish it.  But it seemed like a first draft, in need of shaping, pruning . . . serious editing.

I wish I could be more positive.  Monk deals with an important set of issues.  But the story itself doesn't carry the weight of them.

Disclosure of Material Connection:  I received this book free from the author and/or publisher through the Speakeasy blogging book review network.  I was not required to write a positive review.  The opinions I have expressed are my own.  I am disclosing this in accordance with the Federal trade Commission's 16 CFR, Part 255.

A Tribute to Citizen Mom 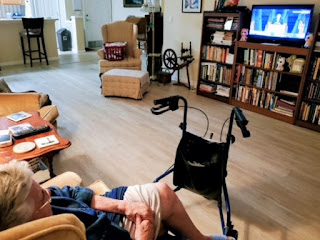 My mother turns eighty-eight next month.  She's lived a lot of years, and seen a lot of elections.  She was born just after the election that first put FDR in office and knew no other president until she was a teenager!  She witnessed the surprise Truman victory in 1948. She cast her first vote for President in 1956. She watched the Nixon-Kennedy debates. She lived through Watergate, the Monica Lewinsky scandal, and the election of our nation's first African-American President.  She has always been aware of current events and politics, always has had opinions about them, but most of her time over the years ahs been devoted to studying things like Latin classics and medieval literature!

But this year it has been different.  There has been a certain urgency to it all, and a real fascination with the unfolding drama of this election season.  She has said any number of times, "This will probably be the last election I vote in."  Obviously, we hope she is wrong, but if it is, she certainly has given it her all, being an extremely well-informed voter.

Like all of us, she was on tenterhooks all last week, waiting for results.  She doesn't watch much television, but more than once we caught her tuning into her favorite cable news network for the latest update as ballots were being tabulated.  Mom is a very early rise, and usually heads to bed around nine.  But last Saturday, when the race was finally called, she took her Saturday night shower early so that she could watch Joe Biden and Kamala Harris address the nation.  I am sure, had it been Donald Trump and Michael Pence doing the same, she would have wanted to watch that as well.  That's her in the picture above, ready for bed, watching the speeches!

Like everyone I am disturbed by the divisions, the rancor, and the deep divide that we must address as a nation.  But seeing young folks excited and involved, seeing my elderly mother so engaged, knowing that a record number of ballots were cast this year, all that, for me, is a sign of real hope.  For when we participate, when we are engaged, our nation is the better for it!

I really hope this isn't her last election, but if it is, I am so grateful for the way she once again has shown us what it means to be an involved citizen! 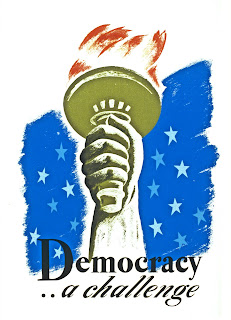 Gun sales are up in 2020.  Significantly.  In fact as of the end of October a new record has been set in the United States.  Over 17 million guns have been sold this year.  And they are not just being bought by the usual gun buyers.  Many are first time gun buyers.  And they come in all shades of red, blue and purple.  People are anxious, frightened, angry.  They feel a need to protect themselves from those with whom they disagree.

I don't know about you, but I find this rather unsettling.  Not because I am unduly afraid of being shot by some outraged citizen who doesn't like how I vote or what I believe.  But rather, because it seems to point to a real decline in societal trust.  Our ability to trust one another enough to openly disagree with one another is a cornerstone of democracy.  It is what makes it work. Because let's face it, we are never going to all agree on everything.  We're probably not even going to come close!  But that should be OK.  That should be part and parcel of what it means to be an American.  You and I both have a right to believe what we want.  We both have a right to advocate for our own position. And we should be able to do so without resorting to violence.

There was a time in this nation's history when even the slightest insult could result in a duel to the death--just ask Alexander Hamilton or Aaron Burr.  But in time we came tor realize (at least legally) that wasn't a very good way to settle differences.  And so, for the most part, the guns were put away.  But which comes first, learning to trust one another, or putting away the guns?  Clearly, that's one of those dividing issues in our society, but really . . . do we need to return to the days of the Wild West?

Call me naïve, call me idealistic, but I've not given up hope.  I still believe we can make this democracy thing work, really work, for the good of all.  But only if we set aside our weapons, not just the guns, but the verbal weapons as well, and really listen to one another.  Really listen.  Maybe if we did that we wouldn't need to stock up on so, so many firearms.