JESUS, BREAD AND CHOCOLATE: A Review 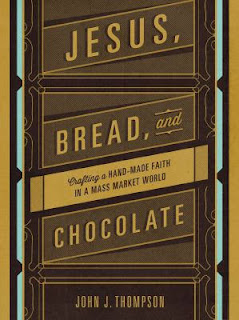 Would Jesus want his followers to drink Budweiser, or some locally produced craft beer?  Would he urge them to eat Wonder Bread, or a freshly baked 12-grain loaf?  These are the kind of questions one can't help but think of when reading John J. Thompson's Jesus, Bread and Chocolate.  In fact, this intriguing volume might be described as a collection of object lessons for grown-ups.  You remember object lessons, don't you?  Sometimes called children's sermons, object lessons involved pastors taking some common everyday item, and using it to illustrate a theological point or to teach a moral principle.  Lots of preachers still use them, including from time to time me.  And arguably, Jesus used object lessons all the time--however we usually call those parables.


But I digress.  The objects Thompson writes about all fall into the general category of artisanal products.  Handmade, hand crafted, individualized things like craft beer, fair trade coffee, home baked bread . . . you get the idea.  Part of the book's charm lies in the details Thompson provides about the objects themselves.  He is a home brewer himself, and lovingly describes the process of creating beer.  "The grain must first be malted," he writes, by exposing it to just enough moisture so that the germ inside starts to grow." (165)  That kind of detail is offered up for coffee, chocolate, farmers markets and indie music.  Again and again he makes the point that what makes such things extra fine is the simple fact that they are not produced by machines and assembly lines, but rather by individuals who truly care about the end result.


The key to understanding Thompson's book can be found in the final paragraphs of his text where he writes:  "In confirmation class, I learned that a sacrament is 'an outward and visible sign of an inward and spiritual grace.'  Therefore, cultivating taste for the good, the true, and the beautiful is a sacramental process.  How amazing is that?  There are outward and visible signs everywhere around us."  (254) Things that can be found in places like farmers markets or small local bakeries.  Throughout the book he attempts to point out the "inward and spiritual grace" tucked away in such common things--much like the germ inside the grain.


As Thompson's half-title indicates, he is advocating for "crafting a handmade faith in a mass-market world" or what he calls "an artisanal faith."  Occasionally he gets lost in the details, but for the most part he successfully makes his point.  His object lessons work.


Thompson's book can be read cover to cover, or, one could benefit from picking out the chapters that intrigue and gleaning the wisdom contained in those so chosen.  To some extent, Thompson's writing is at its best when he focuses on very tangible objects and the lessons they have to convey.  It is less successful when he strays into the abstract.


Which brings me back to my original questions.  I'm not sure how Thompson would answer them.  However, despite Bud being the self-proclaimed King of Beers, I suspect he would have us understand that the local craft beer would be the choice of the King of Kings.  And even though Wonder Bread claims to build strong bodies twelve ways . . . well, you figure it out!


(Disclosure of Material Connection:  I received this book free from the author and/or publisher through the Speakeasy blogging book review network.  I was not required to write a positive review.  The opinions I have expressed are my own.  I am disclosing this in accordance with the Federal Trade Commission's 16 CFR, Part 255)
(Note to my readers:  I am now part of SpeakEasy, a network of bloggers who review books having to do with matters of faith.  Every four-six weeks I will feature a book review that I hope will be of interest to you.  Otherwise, this blog will continue to focus on those issues and ideas that impact our lives as people of faith.  Thank you for your continued loyalty to this blog!)
Posted by John H. Danner at 5:14 PM No comments:

A Voice from the Past, Speaking Out for Today 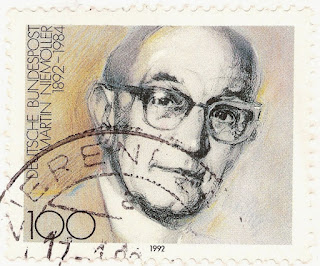 The news these past few weeks has been full of stories about terrorist attacks around the world:  Lebanon, Mali, Paris.  And I am frightened.  Very frightened.  Not so much by the terrorists themselves, though their actions are cause for a measure of fear.  No what really frightens me is the vitriol of the response to their actions that seems to sweeping across the nation.  It especially concerns me when it is packaged as a "Christian" response.

There is something especially frightening about the prospect of some sort of national registration based on religious affiliation.  The suggestion that all Muslims should register as such with the federal government is abhorrent.  And then to go on and suggest that all mosques should be kept under surveillance only increases the level of fear and hatred already present in this country.  Does that mean monitoring all those coming and going from mosques?  Does that mean embedding spies in all Islamic prayer services and classrooms?  We must step up and say no to such ideas.  Not later when they become actual regulations or laws, but now, while they are still only ignoble suggestions.  If for no other reason than to protect our own religious freedoms.  For if the government can do it to one religious group what is to prevent it from doing it to all?

These ideas, as so many have pointed out, smack of the Nazi's rhetoric and actions towards Jews and others in an earlier time.  Indeed, the words of Martin Niemoller, a German Protestant pastor who was held in a concentration camp for seven years, ring as true today as they did so many years ago.

Yes, there are Islamic Radicals, Extremists, Terrorists at work in the world.  And we must seek to bring them to justice.  But we must not, absolutely must not, paint the millions and millions of Muslims around the world and in our own nation, with the same brush strokes.  We must stand up and say, No! 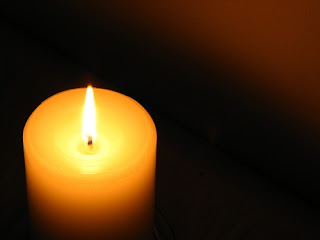 Sunday I attended a Communitywide Prayer Vigil in Fort Myers.  It was held in response to the gun violence in our county and beyond.  Many pastors, musicians, governmental leaders, law enforcement officials and just plain folks gathered to pray and sing and light candles and hold up our common concerns.  Near the end of the service we used a litany called "Vigilance after the Vigil."  An extremely well-written piece, it called on all of us who had assembled to not only pray, but to be willing to take action.

I was reminded on the slogan promoted in years past by an organization up north:  "Pray and Picket."  I am not sure the action called for in this case involves picketing or other such demonstrations, but the sentiment is there:  we can pray, we must pray, but we also must be willing to do more.  A reference was made to an old saying, sometimes attributed to St. Ignatius, that you must "pray as if everything depends on God, and work as if everything depends on you."  And an expression used by  Frederick Douglas was also quoted, inviting us to "put legs on our prayers."  However you say it--what ever slogan you use--the bottom line remains the same.  We've got to get up off our knees and work towards a solution.  That doesn't mean never return to our knees--but it does mean our efforts must include more than prayer.

I'm not sure what shape that will take in my own ministry.  I'm not sure what it will require of me.  But I know I agree with the overarching theme of the evening:  "Enough is enough."  The time has long since come and gone, when people of all faiths, and no faith, need to band together and strive for a more perfect union.
Posted by John H. Danner at 11:47 AM No comments:

Very early this morning I put Linda on a plane so that she could head up north to tell one of her closest friends goodbye.  The friend is in a hospice in New Jersey where she is receiving the palliative care she needs at the end of her life. Linda's friend is one of the brightest, most inquisitive people I have ever known.  She always, always, asks questions.  Good questions.  Tough questions.  Questions about faith, about politics, about social justice.  Throughout her life, she has consistently taken a stand for those who are downtrodden.  As a nurse, she often cared for those who others had shunted aside.  She has a rather wry sense of humor--and loves life.  She and Linda and another friend are planning a private dance party later this week.  At the hospice.  I'm not surprised!

Later this morning I got a call from a parishioner, telling me his wife of many years had died over the weekend.  For several years he has taken great care of her.  He wants to hold a Memorial Service for her later this week.  So we will sit down this afternoon and make plans.  She had identified a few elements she wanted to be included.  We'll look at hymns and scriptures, and we'll consider the story of her life.

Still later this morning, I spoke with the daughter of yet another parishioner.  The family had been debating whether or not to admit the parishioner into a local hospice.  After much discussion, they finally decided, with the full consent of the parishioner, to do just that.  The parishioner is a wonderfully feisty sort of person!  Always thinking about the other guy.   It was a hard decision--but well-considered.

Today marks All Souls Day.  That annual reminder that in the end death comes for us all.  And even if we would rather avoid it, there is no escaping that reality.  But today I have also been reminded , in a very dramatic fashion, that while each of us must walk that road, we needn't walk it by ourselves.  (Despite the old gospel song!)  For even when we walk though the valley of the shadow of death, God is with us.  In friends, and family, in well-trained professionals--and yes, even in dance partners!
For in life--and death--and beyond death, love truly transcends all things.
Posted by John H. Danner at 3:15 PM No comments: