It's August--There Must be a Political Convention Somewhere! 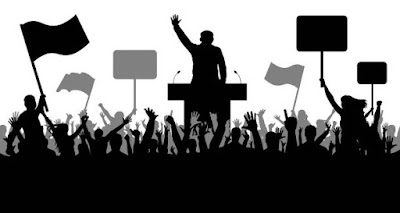 Do you watch political conventions?  I do.  Not gavel to gavel.  But keynote speeches, the roll call of states, and so on.  I watch parts of every convention--that held by my party, and that held by the other guys.  I find them fascinating.  They are a snapshot of what's to come in the fall as we move towards Election Day.  OK, maybe not a snapshot.  Maybe it's a picture more like the ones where your mother made you brush your hair, and put on decent clothes, and smile for the camera.  Conventions (today) are cleaned up versions of candidates and platforms.  Even more so in this time of virtual conventions.

It wasn't always that way, of course.  There was a time where conventions were rough and tumble affairs.  Where different factions of the party fought it out (sometimes literally) for the right to carry the party banner in the election.  Read through history if you don't believe me!  And if you are of my generation, you can remember such affairs, especially 1968, when Chicago erupted.

I'm not sure what's best for the nation in terms of conventions.  The rough and tumble ones gave parties a chance to sort out their differences, maybe not come to agreement, but to honestly say these are the ways we don't agree.  That, it seems to me, may be better than the modern approach, where differences often seem to get papered over.  Yet there is a sense, if only for a few days, of a willingness to work together for a common cause.

Some folks have given up on politics altogether.  Wouldn't watch a convention speech if you paid them to do so.  Even a summer rerun is better, they'll tell you.  But it seems to me as citizens we have some responsibility to really participate in the process.  That means to vote, of course, but it also means to be informed.  So I'll keep watching the conventions.  And I'll take them with a grain of salt.